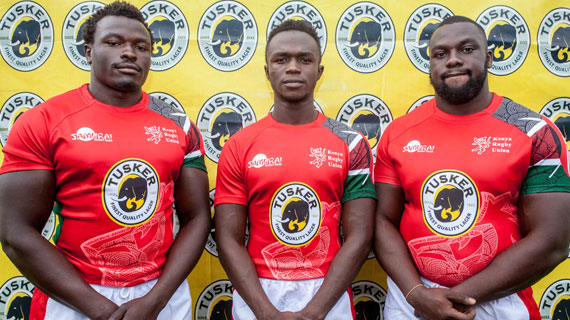 Kenya’s quest for a maiden Rugby World Cup appearance got off to a perfect start with a well worked 28-24 win away to Morocco on Saturday night. Tony Onyango dotted down twice as the Simbas picked their first ever win on Moroccan soil on their third attempt.

The Simbas who missed three first team players in Casablanca now go second in the standings behind Namibia and will look to continue the same form next weekend when they play Zimbabwe at home.

Ian Snook’s men started positively with Biko Adema dotting down the first try which was duly converted by Darwin Mukidza handing them a 7-0 advantage. However, a lapse saw the hosts pick two back to back tries both of which were unconverted to drag a 10-7 lead against their visitors.

They took the lead into the break and when coming back, they seemed to be heading to a destructive  win against the Simbas with a converted try to open a 10 point gap, going 17-7 up.

But Snook’s charges sounded the war drums to kick start their recovery, Tony Onyango cutting down the deficit with a well worked try under the posts which Mukidza booted home for a 17-14 score line.

The boys continued to pound and they re-took the lead, substitute Moses Amusala going over the chalk with Mukidza once again adding the twos, the Simbas moving 21-17 up.

Like a rolling machine, the SImbas went further up with their fourth try of the evening, fly half Samson Onsomu setting up Onyango to complete his brace and Mukidza adding the extras for a 28-17 lead. Morocco made up for a nervous end with a late converted try to move 28-24.

The SImbas held on to their backline with patience with the home side holding on to possession after the hooter had gone, but a knock on from a scrum saw possession overturned and the Simbas take victory.