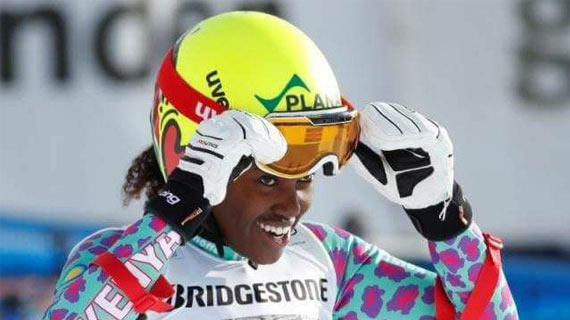 Kenya’s Sabrina Wanjiku Simader has entered her name into history books for being the first Kenyan female athlete to compete at the winter Olympics.

Competing in the super fast downhill giant Slalom category and cruising at speeds above 84km/hr, The 19 year old finished in 38th position during the 2018 Pyeongchang championships in Korea coming ahead of seven other athletes.

Sabrina started her snow experience at a tender age of three when her family moved to Austria where she won races at a young age and has now completed her dream of featuring at the winter Olympics.

She follows in the footsteps of Kenya’s first winter Olympian Phillip Boit who was part of the Kenyan team in Pyeongchang as Chef De Mission.

Unlike Sabrina , Boit first saw snow in 1996, only two years before his Olympic debut and went ahead  to become the first Kenyan to take part in the winter games representing Kenya in Cross country skiing at the 1998, 2002 and 2006 Games.