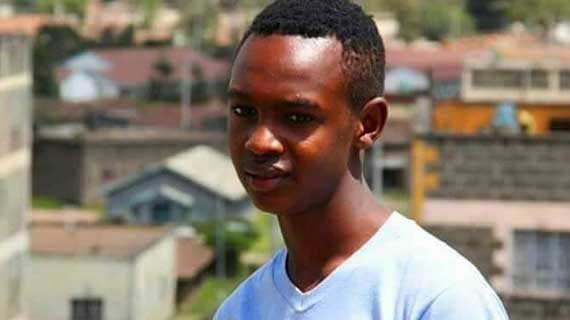 He was always thrilled at every new opportunity to stand in goal to do what he loves the most; Goalkeeping, and Wednesday morning was no different as Vincent Ochieng Agono joined his Makadara team mates for a friendly match against Eastlands FC at Nairobi’s Camp Toyoyo.

Unfortunately for the ever daring teenager famously known as De Silva, this was to be his last day on the pitch as he left on a stretcher after a collision with an opponent as they rushed for a 50/50 ball in the dying five minutes of the friendly.

The young Master Ochieng (born in 1999) passed away on Friday afternoon after two days of fighting for his life at the Kenyatta National Hospital where he had been admitted.

“It is so painful to have lost such a young talented player who had so much passion and vision to one day play for Kenya.” Says his coach Stanley Achima.

“At first it looked like a minor injury that could just come to pass. After the accident he received very quick first aid on the pitch as we had Nairobi Stima team doctor at the scene. We thereafter quickly rushed him to the nearby Jamaa hospital where he was immediately put on Oxygen because he was struggling to breath.” Achima narrates.

“Unfortunately, his breathing was very faint that the Oxygen machine ‘read error’ forcing the doctors to resuscitate him. At this point I went into panic mode because the last time I saw such a scene was in one of those movies. Nonetheless, the doctors here were amazing as they managed to bring his heartbeat back to normal rate.”

Achima continues to say that “At this point doctors advised that we rush him to Kenyatta because there was need for an urgent CT Scan which they didn’t have. This happened really fast as we immediately hired an ambulance to rush him to Kenyatta. Here the scan specialists told us the Scans showed no signs of major risk but advised we get him to a head injury specialist.”

According to Achima, despite all the urgent measures the coaches and family had taken to ensure he reached the best facility at the time, at Kenyatta they encountered a heavy delay “We stayed for over five hours before a head injury specialist looked at his scan documents.” Achima laments. “Finally we were very optimistic when the doctor observed him (at 5:00AM since 11PM the previous night ) and ruled out any signs of major damage to his head despite the fact that he kept bleeding from mouth and nose through the night. Doctors advised that he been admitted for close monitoring and he showed tremendous signs of improvement to a point of even asking for water as he said he was thirsty. Sadly though, regardless of his brave fight to regain strength, we lost him on Friday afternoon.” a broken Achima narrates.

His grieving team mates described him as a brave warrior and the most disciplined/responsible member of the team. Always punctual and an amazing team player who knew how to marshal his defence.

According to Achima, the entire team is in sheer disbelief with some needing counselling to overcome the grief, “The boys are in bad shape and they need urgent counselling because they are still young.”

Achima further noted that the Eastlands FC striker who collided with him on the day was more traumatised as he had planned to visit him in hospital, “They called me to ask when they can visit him, this was on Friday evening, and I am told the boy broke down when I informed them that our keeper had passed on. We are in deep shock” He concludes.

May his Soul Rest in Peace.