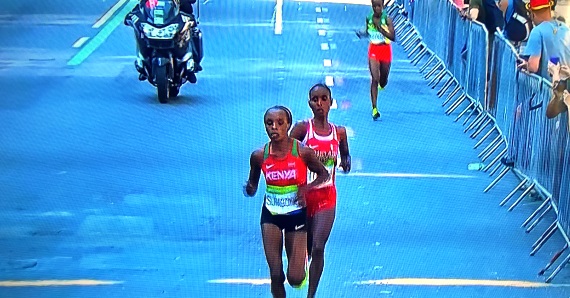 Jemimah Sumgong on her way to win Olympic Marathon in Rio

Jemima Jelagat Sumgong made history by becoming the first Kenyan to win the Olympic Women's Marathon gold after winning the Rio 2016 race in a time of 2.24:04.

The  latest development could see Kenya lose the title  to Kenyan turned Bahraini Eunice Kirwa who clocked 2:24.13  to win silver

According to a report published by the BBC on Friday , the 32-year-old military officer tested positive for the banned blood enhancer EPO in a random test conducted by the IAAF in Kenya.

"We can confirm that an anti-doping rule violation case concerning Jemima Sumgong (Kenya) has commenced this week," the IAAF said in a statement." The athlete tested positive for EPO (Erythropoietin) following a no-notice test conducted in Kenya.

"This was part of an enhanced IAAF out-of-competition testing programme dedicated to elite marathon runners which is supported by the Abbott World Marathon Majors group." As quoted by the BBC report.

The reigning London marathon champion was keen to return to London to defend her title  on April 23rd and the latest revelations will see her omitted from the list of elite runners as she now stands banned until after her B sample  test are revealed.

Sumgong's case adds to the long list of more than 40 recent cases of Kenyan athletes who have  been found to have violated the WADA (World Anti-Doping Agency) code in the past five years. Among those currently serving a  four year ban is 2014 Chicago and Boston Marathon champion Rita Jeptoo who also tested positive for EPO.