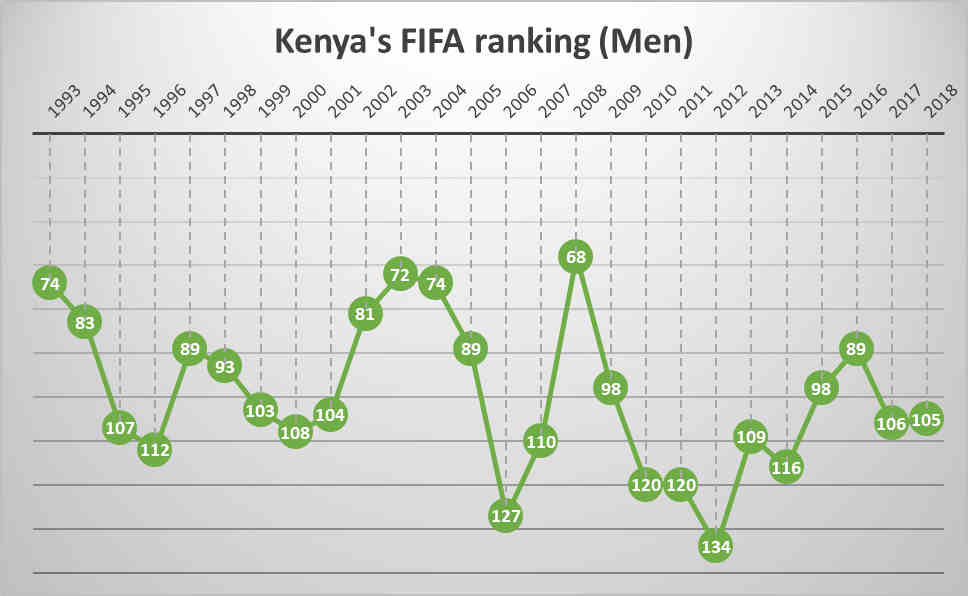 Kenya is currently placed 105th in the Men's FIFA World ranking and have averaged 101 in the last 25 years.

The best ever FIFA ranking achieved by Kenya was in 2008 when they were placedd 68th worldwide. Francis Kimanzi was the Harambee Stars coach then. A rejunevated Harambee Stars beat Namibia, Guinea and Zimbabwe at home and managed a draw at Harare in one of the best ever runs for the team.

The worst ranking was in 2012 when Kenya was ranked 134th worldwide. Harambee Stars coach was James Nandwa who had taken on in interim capacity following the departure of well-known Frenchman Henri Michel.

Kenya is in Group F of the 2019 Africa Cup of Nations qualifiers alongside Ghana, Ethiopia and Sierra Leone.They last participated in the continental soccer bonanza in 2004 when it was held in Tunisia. Kenya bowed out in the group stages

Harambee Stars got off to a rocky start in the 2019 Africa Cup of nations qualifier after the team lost 2-1 to Sierra Leone in June 2017  at the Siaka Stevens Stadium in Freetown. Ghana thrashed Ethiopia 5-0.