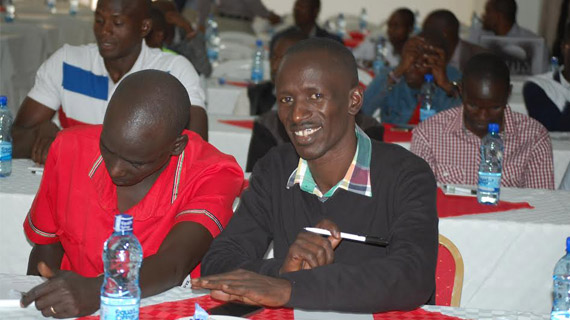 Tuwei spoke during the anti-doping seminar held in Eldoret where 108 athletes who were put into the newly formed Kenya Doctors Network were invited to be briefed and signed on the new medical guidelines.

The KDN will be responsible for clearing athletes for races abroad and whenever they will be seeking medical attention both locally and internationally.

With six professional doctors in the network distributed in Eldoret, Nairobi, Kericho and Iten, athletes are suppose to consult them in any move concerning their careers and the body was formed to limit bad medical practices by some of the doctors in the country that may promote doping.

According to Tuwei, the IAAF and World Anti-Doping Agency saw Kenya as not serious in fighting doping amongst its athletes hence the formation of the network.

Kenya was also put into the WADA watch-list of countries which were non-compliant to its code until the end of this year.

“The two bodies saw that the country was not serious in fighting the doping issue hence its stay in the watch-list was extended till the end of this year,” Tuwei said.

“Through the advice of the IAAF which also vetted the doctors, we formed the network and we are committed in fighting the menace. Kenyan athletes have been running clean since but only some few cases that almost tainted our image,” He added.

For the past five years Kenya has been bedevilled with doping cases with 49 athletes having been found to have violated the code.

Tuwei said they started with elite athletes and with time more athletes will be added to the list as well as more doctors.

Athletes present welcomed the move commending the initiative as positive in fighting the use of performance enhancing drugs.

Olympic marathon champion Eliud Kipchoge said more sensitisation on how the network will operate needed to be done since most of the athletes are not aware.

“We welcome this move and we also want more sensitisation on the part of an athlete so that we know how to conduct ourselves. Otherwise this idea is good,”Kipchoge said.