Kenya Prisons, KCB to face off in Club Champs Quarters 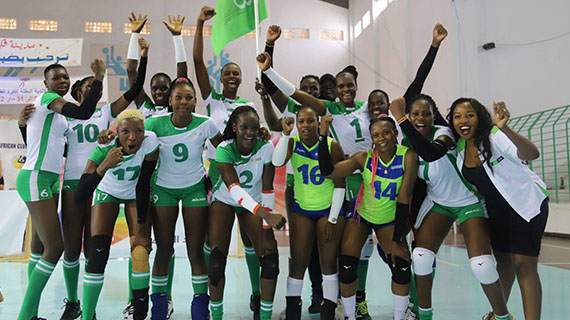 The bankers will face off the unbeaten Warders in Saturday’s quarter final duel after both won their round of 16 matches in straight sets.

KCB Celebrate after their match in Tunis/ CAVB

One Kenyan team is set to fall off the hunt for this year’s African Women’s Volleyball Club Championships after Kenya Prisons and KCB fell on the collision course in the quarters of the tournament currently on in Tunisia.

The bankers will face off the unbeaten Warders in Saturday’s quarter final duel after both won their round of 16 matches in straight sets.

Prisons continued with their winning streak after coming off the group phase unscathed continued with their red hot form after thrashing DR Congo’s La Loi via straight sets. The warders won the opening two sets by identical 25-15 scores before completing the job with some little resistance in the third set which ended 25-18.

Meanwhile, KCB who are looking beyond their ninth-place finish from the last tournament also won by straight sets, easily scratching off from Nigeria’s Customs 25-18, 25-16, 25-14.

Prisons were third place finishers in the last tournament and heading into the fixture, they will be favourites on paper to carry the day.

Meanwhile, Kenya’s other representatives Kenya Pipeline have booked a date against Cameroon’s FAP in Saturday’s quarter final after whitewashing Uganda’s Ndejje University by straight sets of 25-20, 25-12, 25-13.

Should Pipeline scrape through against FAP, then it will set up an all-Kenyan semi-final date and this will ensure that at least one Kenyan team will play the final.