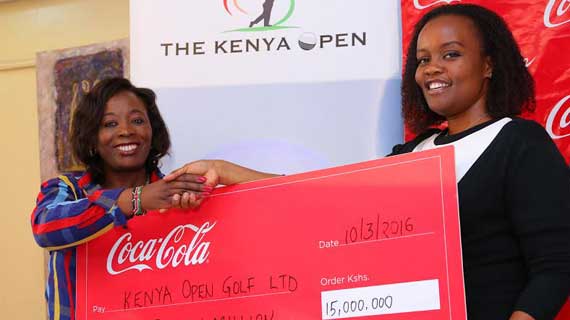 Coca-Cola will for the second year running be the Platinum Sponsor at Barclays Kenya Open 2016, leveraging its full beverage portfolio for the sponsorship worth Ksh. 15 million.

The 2016 Kenya Open Golf tournament will be played from March 17th – 20th at the Karen Country Club and this will be Coca-Cola’s third consecutive sponsorship of the tournament.

As a platinum sponsor, part of the sponsorship will also include a Pro-Am tournament to be held on March 15th at the same venue. The Pro-Am offers an opportunity for Kenyan Amateur golfers to play with professionals on their own turf.

Mona Karingi, Coca-Cola’s Country Marketing Manager for Kenya, said, “Coca-Cola has always been associated with iconic sporting events.Through our relationship with sporting events, we seek to advance the overall development of sport. We aim to make sporting competitions possible by supporting events such as this, for the participation and pleasure of athletes and spectators.”

“By retaining our presence and participation in a premier golfing occasion such as this, Coca-Cola is able to combine the promise of refreshment with a sense of thrill, celebration and passion for the game.” reaffirmed Mona Karingi.

Mrs. Karingi also congratulated the Kenya Open Golf Limited Board of Directors for their consistency in the management of the tournament.

The Barclays Kenya open is the only European Tour Event in the region with a high level of visibility globally. Several local and international players will be gunning for the top prizes and a chance to play in the European PGA.