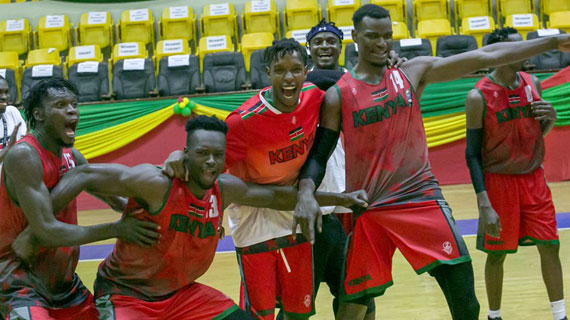 The Kenya men basketball team made history on  Wednesday night after qualifying for the semi final of the 2019 International Basketball Federation AfroCan tournament in Mali.

The Kenyan dream team continues to stun  Africa with incredible performances having qualified for the last eight after beating Ivory Coast in the round of sixteen. In the quarter finals on Wednesday night, the Kenyan side won it late with a dramatic 14-08 overtime kill.

Tunisia had slim wins in the opening two quarters with 20-19 and 16-14 leads but the Morans enjoyed a stronger third quarter where they scooped a 10 points gap winning 10-20 to make the difference.

Tunisia would then recover in the fourth quarter with a 22-15 win to push the match into  overtime where Kenya sustained their grit to qualify for the semis with an overall 76-82 win.

Kenya will next meet Morocco in the semi finals.

Morocco overcame hosts Mali 69-61 to book their date with the Morans while Angola defeated Algeria 89-62 to be the first to reach the Last Four.

In another match , Democratic Republic of Congo had to work hard to knock out Chad by 67-60 points.