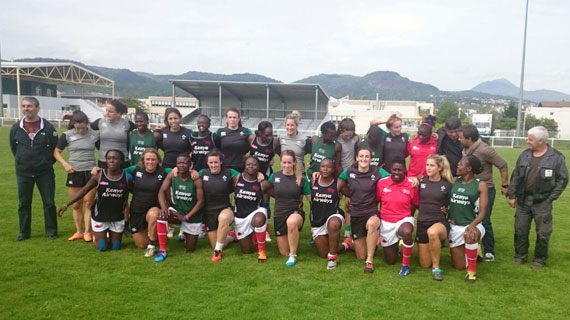 The Kenya Lionesses landed safely in Clermont –Ferrand on Wednesday 25 May 2016 ahead of their maiden appearance on the HSBC Womens Sevens World Series at the season finale in the French city on 28/29 May.

The team held a training session on Wednesday afternoon to shake off the travel fatigue and held a joint training session with Ireland on Thursday morning, a session described by Head Coach Mike Shamiah as being productive.

“This joint session with Ireland enabled us fine tune and get a feel of what to expect come Saturday when we make our series debut,” said Shamiah.

Team Physio Ben Mahinda added, “ The players are in good health,  we have no injury concerns. “

The Lionesses are in Pool A alongside England, Spain and the USA. They start their campaign with a clash against Spain on Saturday 28 May at 1.06pm Kenya time before playing England at 3.28pm.  They sign off with a date against the USA at6.34pm.