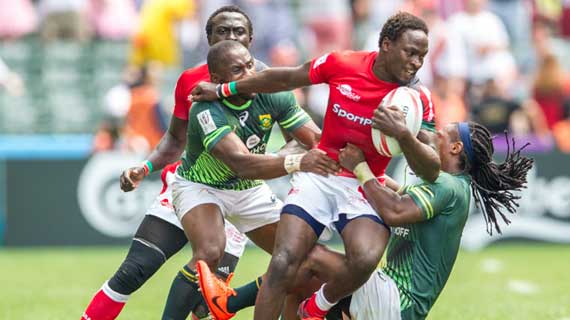 Kenya's rugby sevens team 'Shujaa' has settled for position 12 in the 2019/20 World Sevens Series after World Rugby declared the season over on Tuesday.

After the cancellation of the remaining four legs of the Series, World Rugby (WR) also announced New Zealand, as the 2019/20 season winners.

London, Paris, Singapore and Hong Kong circuits have been cancelled due to the ongoing worldwide pandemic.

The All Blacks topped the leader board with 115 points with three circuits wins in Hamilton, Vancouver and Cape Town to be declared winners. South Africa and Fiji completed the podium places with 104 and 83 points respectively.

At the same time, leaders New Zealand women’s team- Black Ferns has also been declared the 2019/20 champions with 96 points. The Women's World Rugby Series had done five of the eight rounds. Olympic winners Australia and Canada settled for the second and third places respectively.

In the meantime, there will be no relegation in both the men and women’s Series this season. WR Challenger Series final events for both genders will not be staged this year owing to the pandemic.

Japan have been awarded the inaugural men’s Challenger Series gong after they sat at the  top of the table after the two completed rounds. They won gold and bronze in the two legs early in the year in Chile and Uruguay. Japan will join the HSBC World Rugby Sevens Series 2021 bringing the total to 16 teams.

The inaugural women's Challenger Series that was scheduled for March 28-29 in Stellenbosch, South Africa did not take off  hence there will be no promotion to the Series for the gender.

"While it is very disappointing for players, fans, organizers and everyone involved to have to cancel these events due to the global Covid-19 pandemic, the health and well-being of the rugby community and wider society remains the number one priority. These difficult decisions have been taken following detailed consultation with our union partners and in line with advice from the various government and public health agencies around the world, given the global nature of the HSBC World Rugby Sevens Series.