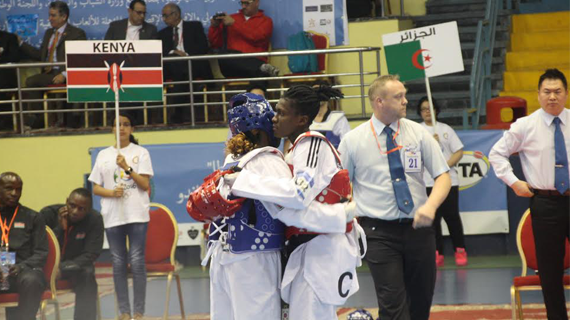 Despite shoddy preparations and lack of exposure, Kenya finished 11th in the just ended Taekwondo Africa Olympic qualifiers held in Morocco.Over 30 countries took part in the one week’s event that saw Egypt, Cote D’ivoire and Morocco tie in the first position after two of their players qualified  for the 2016 Rio Olympic Games.

Team coach Voiya Lumwach described Kenya performance  as exemplary noting that they were playing against teams that had prepared well with immense  sponsorship from their Governments.

He said owing to lack of funds, Kenya managed to send only four players namely Gladys Mwaniki,Emmanuel Nderitu,Milka Akinyi  and Martin Odour who managed to push their opponents to the wall despite being eliminated.

Voiya gave an example of  Glady’s  Mwaniki who lost 11-2 to Ggabbi Ruth of Cote D’Ivoire who is ranked second in Africa and 11th globally.Nderitu finished 7th in the featherbantam category that attracted 20 participants.

Voiya who was flanked by team manager Nesmus Wesonga and George Wesonga who is the secretary General of the Association attributed the team’s dismal performance owing to fatigue where they spend 16 hours in their flight  and lack of exposure compared to their opponents.

"Egypt,"added Voiya, "camped in Australia  for two weeks intensive training while Senegal trained in Iran. This among other countries had adequate training ahead of the Morocco Championship. We trained  for barely two weeks  which is not enough. Nevertheless, with proper training and good  exposure by playing against foreign team’s ,Kenya has talent and I know  we can make a great impact “ noted Voiya.

Wesonga observed that there is need to scout new players from public schools targeting 14 years  old bracket. He noted such a player within another  four years to come  can develop to a super star if given adequate mentorship and good training.

Wesonga said  his Association will start scouting players from remote areas like Turkana, and Pokot targeting slim and tall players .

“We have to change our tacts by going back to the drawing board. We have plenty of talents which are going to waste  since  nobody is out there  to talk and nurture them. Going out to the villages and especially those remote  areas of Pokot and Turkana, we can pick very good youthful players  whom we can train and nurture them”he noted.