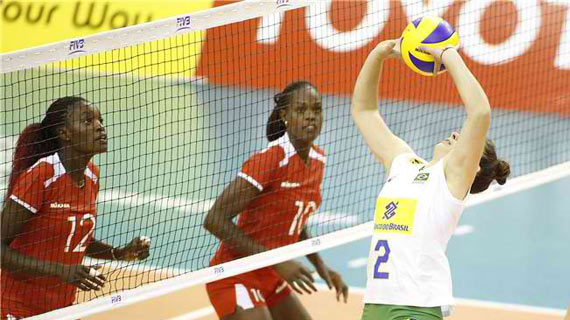 Kenya's Ann Lowem and Yvone Snaida in action against Brazil during the U-23 FIVB World Championships in Slovenia./Photo courtesy of FIVB

Kenya's junior volleyball team  started their U-23 World Championships appearance with a baptism of Brazilian samba stardom  losing in straight sets of (15-2, 15-5, 15-12, 15-10) at Sportna Dvorana Tivolo hall in Ljubljana.

Though they lost the opener  to the more experienced Brazil, Kenya coach Catherine Mabwi remains optimistic that this presents a good opportunity for the young Kenyans who are out to gather as much experience as possible  “Brazil was a tough opponent today. My team tried very well. The score was okay. It’s only a few mistakes here and there. Otherwise, for the first international match the girls did very well."

Kenya is in Pool A that also  features defending champions Brazil, Turkey, Japan, Bulgaria and  Cuba.

Kenya's next match will be on Monday afternoon when they face Bulgaria hoping for a better perfomance.

The tournament in Slovenia  will see the introduction of a new scoring system for volleyball currently under review by  FIVB. According to the new system , matches in Ljubljana will be played to best-of-seven sets with each set to 15 points (with at least a two-point difference needed). Three ranking points will be awarded to teams winning 4-0, 4-1 or 4-2. Two points go the winner of a 4-3 match with one point for the loser.

If successful, this new scoring system could mark a historical turning point for volleyball - much as the introduction of the Rally Scoring System did in the late 1990s.