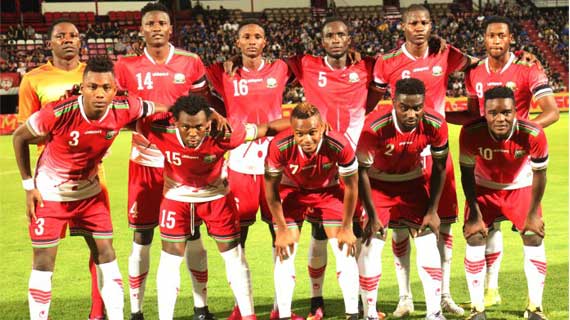 Kenya slipped a spot down to land at 106 in latest FIFA World Men's ranking released on February 15th.

Harambee Stars last outing was the Cecafa Senior challenge that they won after overcoming Zanzibar in post-match penalties.

Their last match outside Kenya was in October last year when they lost 1-0 to Thailand and 2-1 to Iraq during the Asian tour.

Neighbors  Uganda have gone down five slots but are still in an enviable 78th worldwide and are the best ranked in East Africa.

Tunisia remain on top of the CAF standings and are 23rd worldwide followed by Senegal and Congo DR respectively.

World Cup qualifiers Egypt fell by 13 positions to rank at 43rd worldwide and 5th in Africa.

Germany, Brazil, Portugal, Argentina, Belgium occupy the top five spots in the world in that order.

Points are based on the results of all Fifa-recognised full international matches.

Fifa ranking uses points that are awarded for the result(R) and importance (I) of the Match, multiplied by the strength (T) and confederation (C) of the opposition (P = M x I x T x C).

Kenya is in Group F of the 2019 Africa Cup of Nations qualifiers alongside Ghana, Ethiopia and Sierra Leone. They last participated in the continental soccer bonanza in 2004 when it was held in Tunisia. Kenya bowed out in the group stages

Harambee Stars got off to a rocky start in the 2019 Africa Cup of nations qualifier after the team lost 2-1 to Sierra Leone in June 2017  at the Siaka Stevens Stadium in Freetown. Ghana thrashed Ethiopia 5-0.