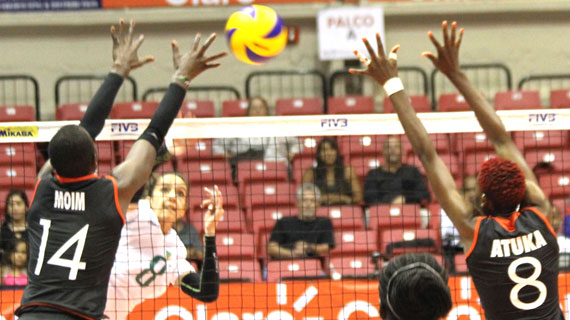 Kenya players in action against Algeria in San Juan

Kenya recovered from their 3-0 loss to Colombia on Friday to beat North African side Algeria 3-1 (25-14, 23-25, 25-14, 25-16) in an exciting World Olympic qualifiers match staged at the Roberto Clemente Coliseum gymnasium in San Juan Puerto Rico on Saturday night.

Experienced star Brackcides Khadambi scooped 23 points in the match from 14 spikes,4 blocks and 5 serves but it was Algeria's Yasmine Abderrahim who stole the hearts of many fans at the gymnasium with her steady performance which saw her contribute a game high of 30 points.

Kenya started the match powerfully pulling away with four quick points to lead the opening moments 4-0 and 8- 3 by the first technical timeout.The Kenyans showed prowess on blocks and attacks to easily win the set 25-14.

Algeria looked more composed in the second set pinning Kenya to commit easy mistakes especially through the 17-year lethal attacker Yasmine Abderrahim.Algeria recovered well and held on to a slim advantage to win the second set 23-25.

The third and 4th sets were easy for Kenya as they locked out Algeria danger girl Yasmine with accurate blocks.

The win by Kenya  sealed Algeria’s hopes of qualifying for the Olympic games while Kenya still have an open chance depending on how they play against host nation Puerto Rico in the final match on Sunday.

Puerto Rico defeated Colombia 3-0 leaving the sole slot wide open to be won by any of the three teams (Puerto Rico, Colombia and Kenya)

Speaking after the match, Algeria coach Belacel Mohamed said they are happy to have pushed Kenya to drop a set considering they lost 3-0 to the same team during the Africa qualifying round in Cameroon in February.

“ I am happy that we could pick a set and be hard against Kenya. We have a very young team and we are hoping to improve in the future. Algeria's coach noted.