Kenya Bodybuilders too strong for Ugandans 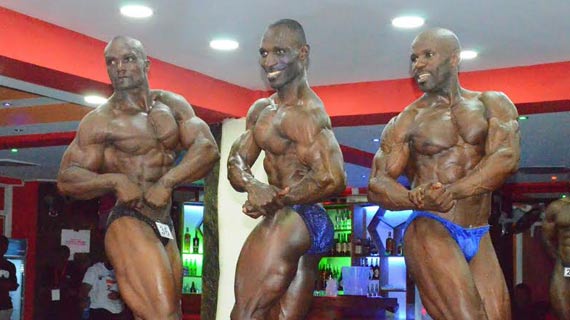 Kenya Bodybuilders too strong for Ugandans

It was joy and celebrations for Nairobi’s Rashid Issa weighing 84.7 kg as he staged a gallant show to win the overall title of the Kakamega Bodybuilding open Championship held at the Kakamega Golf Club.

Winners in each category were rewarded with food  supplements worth Ksh.5,000 from sponsor’s GSN while the overall winner received similar stuff worth Kshs 50,000 , glittering trophy and unspecified amount of money.

Nevertheless, it was a bad outing for Uganda bodybuilders who found the going tough with their Kenya  counterparts  outsmarting them in all categories.

The best Ugandan performer was  Peter Mugaisi who finished 5th in the  light heavyweight category that was won by Rashid Issa who weighed 84.7 kgs.Robert Abonyo finished second  followed by Simon Magak.

Veteran William Cassidy who was runner up in this year’s Mr. Kenya championships was given a  run for his money  settling for second spot in the middleweight  category behind Marvin Okello who weighed 78.4 Kg.  Omar Makongoto settled for third  spot.

Kenya Body Building Federation ((KBBF) Chairman Chris Omedo emphasized on the importance of spreading the sport countrywide in their bid to tap new and local talent.

“We are trying to host as many competitions as possible. This will enable us discover more talent and grow the sport countrywide. “he noted.

Kennedy Lubanga,The Kakamega County Body building federation Chairman Kennedy Lubanga was delighted with the turn out and lauded  KBBF for hosting the event in his home turf.

“We in Kakamega believe in unison and cohesion. It’s a unique event in our county because it was the very first one since the new office was elected. It’s also a great opportunity to try and harness raw local talent within our county. We applaud the national office and call upon sponsors to come forward in support of body building for the future of this sport.”