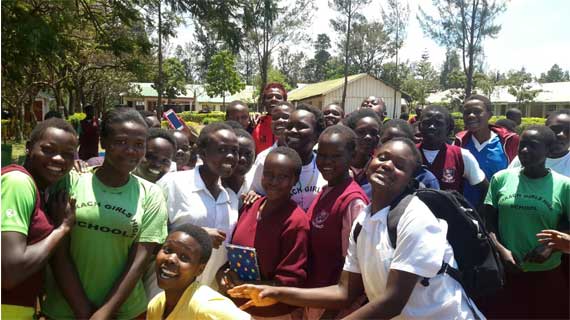 Reigning Kenya Volleyball Federation Most Valuable player Triza Atuka has advised young and upcoming female sports persons to keep off from early sex if they want to succeed in the murky sports arena.

Atuka who is also the captain of the reigning women's national league champions, Kenya Pipeline womens' volleyball club said this over the weekend where she took time off the court to share her personal experience,  both as a player and student with the upcoming talents. She also conducted a volleyball clinic for Nyakach Girls volleyball team as part of her CSR activities.

"I started playing volleyball in High School, just like you. It wasn't easy because my parents never bought the idea in the begging but I never gave her the chance to stop me from playing by ensuring that I performed well in class. Discipline is key if you want to succeed," Atuka who was voted Magharibi Awards Sports person of the year 2016 said during a talk which was attended by all students taking part in sports, including Harambee Starlets goalkeeper, Lilian Awuor.

Atuka said her plan this year is to traverse the country and spread a similar message of hope to students who may be struggling to balance academics and sports, arguing that some parents put a lot of pressure on their children to perform in class at the expense of their talents.

"A lot is expected from you by the society, your parents included; it is not easy to maintain the top standards once you get up there. You need to be highly disciplined to make good choices like abstaining from early sex. Stay away from men, at least for now. Let's perform on the pitch and in class, not anywhere else," added Atuka, herself a B.com student at Jomo Kenyatta University of Science and Technology.

Atuka, in her presentation titled, 'striking a balance between class and pitch' also warned the young players on the danger of doping and the need for hard work before taking the School's volleyball team through a rigorous drill where she shared basic skills with the young talents.

Nyakach volleyball team never proceeded beyond the regional stage in last year's school games but the academic giants School from the Nyabondo Plateau in Kisumu County wants to flex their muscles on the pitch too and they have set their eyes on a maiden appearance at the national scene this year according to George Omondi, school's Head of Games department.

"We've been performing well in girls football but we also want to raise the standard of volleyball. Our objective is to take at least two teams to the nationals each year," said Omondi.