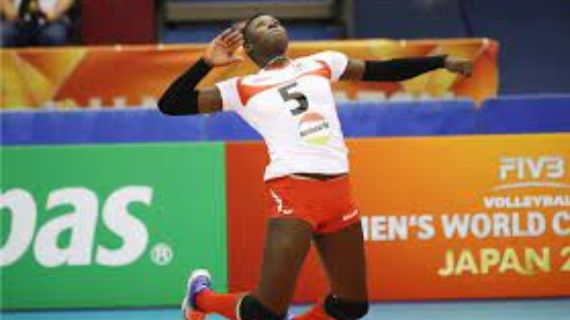 To clinch the award, Chepchumba beat a healthy field that included two starring performers from the just concluded Deaflympics in Brazil.

KCB opposite hitter Sharon Chepchumba has been crowned as the May Sports Personality of the Month by the Sports Journalists Association of Kenya (SJAK) in conjunction with sponsors LG.

Chumba was one of KCB’s biggest performers at the Africa Women’s Volleyball Club Championships in Kelibia, Tunisia, where she was named Most valuable player as she helped the bankers clinch the title for the first time since 2006, their second continental crown.

To clinch the award, Chepchumba beat a healthy field that included two starring performers from the just concluded Deaflympics in Brazil.

She beat Simon Kubai who won double gold in the 5,000m and 10,000m as well as Isaac Makokha who became the first ever Kenyan golfer to win a medal at the Summer Deaflympics. Strathmore Leos’  Brunson Madigu was also nominated after being named MVP at the Kabeberi Sevens.

“I am really grateful. Winning this award means a lot to me because I have had a challenging season due to injury, this motivates me more even as we head to the World Championships to help my national team win. This is the first time I have owned this type of a fridge,” Chepchumba said as she received the award.

She added; “I thank LG for this acknowledgment and SJAK as well for monitoring our work. I usually see other sports disciplines awarded on TV, I am grateful that it has come to be a reality. It is also encouraging for other players who will look at this and know that hard work will always be rewarded”