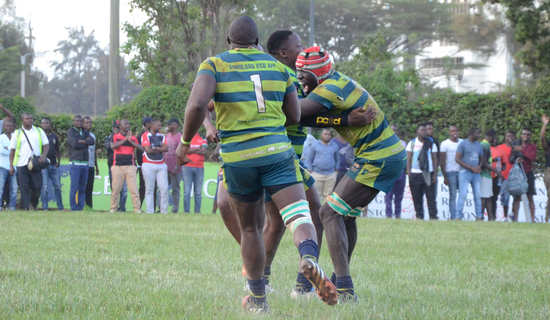 Kenya Commercial Bank RFC want to mark a repeat of last season when they won both the Kenya and Enterprise Cups and coach Curtis Olago believes they have the ability to do so. The bankers have already grabbed the Kenya Cup title after beating rivals Kabras 29-24 over the weekend.

They begin the Enterprise Cup title defense on April 21 with a quarter final tie against the winner between Mwamba and Kisii who meet a week earlier in the pre-quarters phase.

“We already have two trophies with our juniors winning the ESS Cup and now we want to extend it further. We can’t pre-empt things but we now need to focus on the remaining assignment and see how it goes,” Olago said.

The bankers will lose a huge chunk of their first team players who will join the national team’s training camp ahead of the World Cup Qualifiers which begin in June but Lilako believes this will be an opportunity for the other players to step up and show their worth.

Meanwhile, Olago has lavished praise on his squad following their resilient performance in the Kenya Cup final.

“They refused to lose and had such superb resilience. Credit to Kabras because they actually trained for us; they trained on specifics. But credit to the boys and all the staff members for the effort they put for that match and the season. We started with a new game plan and it paid off; we are unbeaten,” Olago further added.