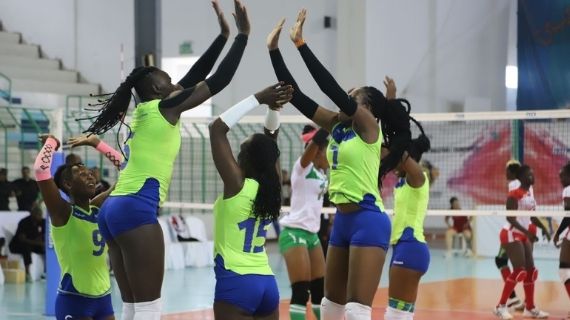 Speaking after reaching the final, the first since 2007, head coach Munala lauded his charges but was magnanimous for achieving the feat at the expense of the fellow Kenyans.

Action between KCB and Pipeline

The bankers at their impeccable best dismissed their compatriots in sets of 25-15, 25-23 and 25-12 despite the Oiler’s second spirited fight for a comeback.

Speaking after reaching the final, the first since 2007, head coach Munala lauded his charges but was magnanimous for achieving the feat at the expense of the fellow Kenyans.

“We’re happy we’ve won and qualified for the finals after a very long period. However, it’s also painful that we’ve qualified against fellow Kenyans. We would have really wanted an all-Kenyan affair in the finals but now we will carry the country’s flag. The focus is now to win the title,” Munala, said.

On their way to the semis, KCB who finished ninth in their last outing in 2019 had stunned local champions Kenya Prisons 3-0 in the quarter-finals.

His captain Edith Wisa believes the current gap between Kenyan teams and their North African opponents has narrowed, and she is optimistic they will win the title they last won in 2006.

“Going by this year’s performance from the Kenyan teams, I can say the North African team’s dominance is over. This year we have a Kenyan team in the finals and this is after a very long period. We focus now to finish the assignment by winning the title,” said Wisa

The last time a Kenyan team reached the final was in 2015 when Pipeline lost 3-1 sets to Ah Ahly in Cairo while Kenya Prisons, who finished fifth this year, is the last Kenyan side to win the title in 2013.