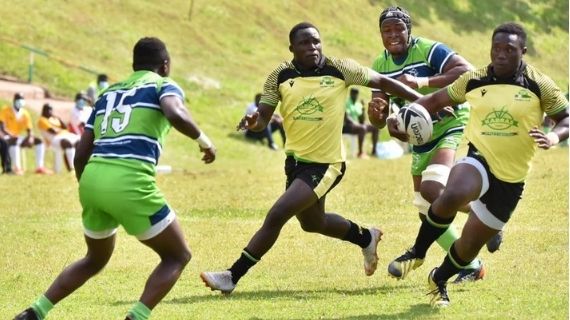 Past action between KCB and Kabras

Two more Mukidza penalties put the bankers 9-3 up before Kabras, down to 14 men after Walter Okoth’s yellow card, responded through a Dukisa penalty.

Mukidza then converted Samuel Asati’s try as the bankers took a 16-6 lead into the break.

Simbas prop forward Patrick Ouko then added a second try after the break, Mukidza sure with the boot for a 23-6 score before the Kabras revival began.

George Nyambua went over the whitewash with Jone Kubu converting for a 23-13 score.

The visitors enjoyed territory and possession, dominating KCB in the forwards and their incessant pressure finally paid off when scrum half Brian Tanga touched down with Kubu converting for a 23-20 score.

It remained a close contest, anybody’s game at this moment before Darwin Mukidza set up Alvin Otieno for the try that secured the game for the bankers.

Following the result, KCB finished the regular season in second place, unbeaten in their 11 outings, having won 10 and drawn 1 for 48 points, two behind Kabras Sugar who have won 10 and lost 1 of their 11 regular season outings to date.

Both sides will benefit from home ground advantage in the semifinals set for Saturday 5 March 2022.