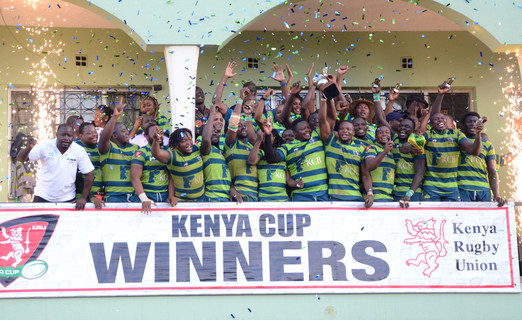 It was another case of so near yet so far for Kabras Sugar as the former Kenya Cup champions lost a second consecutive final to Kenya Commercial Bank, going down 29-24 at the Lion’s DenIn Ruaraka on Saturday evening.

Kabras, coached by Charles Cardovillis had looked set for an upset, but they could not put out a consistent performance with KCB using their experience and wit to carry the day.

Though he contributed 14 of the 24 points Kabras amassed in the final, Ugandan ace Philip Wokarach will rue the six points he missed off the three tries his side picked in the match. Had he converted, then things would have been different.

On their side, the bankers converted three of the four tries they dotted down while they added three more points from a penalty.

Playing at their home turf, KCB had a perfect start to the match. Kabras lost Asuman Mugerwa to the sin bin less than five minutes into the match and Brian Nyikuli punished the numerical disadvantage after powering into the try box. Mukidza converted, KCB going 7-0 up.

Kabras, not ready for a second loss in the final responded with Wokarach booting home a penalty. They took a one-point lead when Johnston Mungao stole the ball off a KCB line-out and sprinted above the chalk. Wokarach missed the conversion.

George Nyambua stretched Kabras’ lead further with their second try of the match when he sneaked in under heavy KCB bodies off a maul to make it 13-7 for his side. Cardovillis’ side had finally gotten their grove of the game.

They were strong on the contact, had used their bodies well off mauls and pushing KCB into their 22 and the battered bankers were seemingly retreating and avoiding contact.

But once they recovered from the battering, they were up at it again. Brian Omondi easily evaded a tackle to touch down KCB’s second try of the match after a wonderful offload from Peter Kilonzo. Mukidza was spot on with the conversion as KCB went 14-13 up.

The bankers sneaked in for a 19-13 lead at the break when Jacob Ojee dotted down on the left after some patient build up.

After the break, Kabras came aiming to overturn the lead and they kicked off well with Wokarach converting a penalty. However, the six-point lead was restored when Mukidza responded in kind for the hosts.

But it wasn’t just about to be over for Kabras. Philip Wokarach with his famous quick feet found some space on the right to extend a hand over the try line. But, he could not take his side into the lead in what would have been a turning point for the game, missing the conversion as scores remained 22-21.

A wonderful show of strength from Martin Owila looked to have won the game for the bankers, the Kenyan international’s sheer grit of hand pushing away two Kabras players before he touched down under the posts. It was an easy conversion for Mukidza, KCB restoring their lead to 29-21.

But, there was to be late drama with Kabras not willing to let go of the title in sight and they managed to reduce the gap with Wokarach’s third penalty of the game. However, despite the late effort, KCB’s resistance pulled them through.