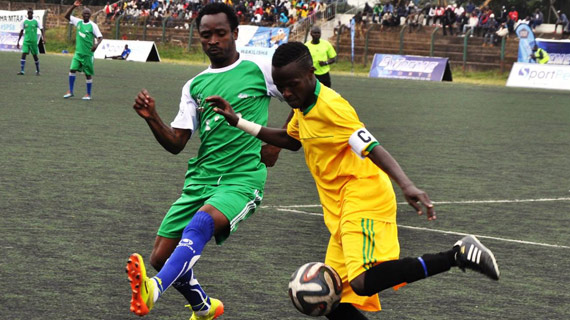 Kawangware Youth vs Ndiguna at the City stadium on Sunday

Kawangware United produced a full packed performance in an 8 goal thriller during the Super Eight quarter final match against Ndiguna at a match played at the Legendary City Stadium beating youth Ndiguna 5-3.

Oliver Kamadi opened the scoring when he slotted in a glancing header from the penalty when he was left unmarked to convert a well taken free kick by Samuel Ndungu after danger man Billy Juma was fouled in full flight.

10 minutes later Dreadlocked midfield Marshall Samuel Ndung’u produced a magic 25m free kick to the top left hand corner making the goals to stand at 2-0 on minute 17 the score that remained into half time.

Diminutive former AFC Leopard forward Billy Juma used his pace, experience and power to rocket in a third in the 60th minute after a swift counter attack after Ndiguna wasted a clear scoring opportunity on the opposite side.

Francis Thairu’s experience capped up a superb performance by the Kawangare based team adding a brace with Ndiguna scoring three quick goals through Sterling Yauya brace and Staus Okello but it was too little too late to catch up.

Earlier at the same venue, Lucky Summer were not so lucky as they were bundle out of the tournament by a determined Kiambio Youth in post-match penalties after both teams settled for a 1-1 draw.

Both teams went neck to neck before Lucky Summers Ochieng Okello had his penalty saved before Patrick Earnest stepped up to score a decider or Kiambio Youth.

Kiambio Youth will now meet MASA while Kawangware United have booked a date with technical University of Kenya commonly referred to as TUK.