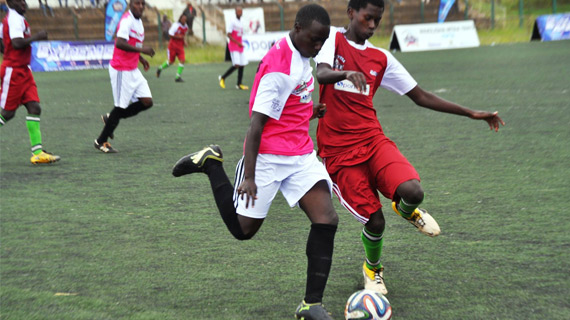 Kawangware vs Melter Stars at the City Stadium

Two goals in two minutes on either side confirmed the rivalry between Melta from Kabiria and Kawangware United in a six goal thriller during the finals of Super Eight tournament for Dagoreti played at the legendary City Stadium on Sunday afternoon.

Playing with composure, the youthful Melter, buoyed by their passionate fans dictated the pace of the match getting their opener in the 35th minute when Musa Dalton raced on to a through ball past the undecided stopper to nib the ball in past a stranded James Kamau in Kawangware Goal.

Dalton was a thorn in Kawangware’s flesh forcing several saves from James Kamau before half time. Former City Stars ace Francis Thauri restored Parity in the 55th minute for Kawangware before taking the lead 10 minutes later when Melter defender gifted an easy home pass to slot home with ease .

Minutes later, the same scenario would repeat itself on opposite half when James Kamau misjudged a flicked header from his own defender to allow in a soft goal to squarely put the Kawangware derby at 2-2 with 15 minute to go.

Michael Kiarie’s speculative shot from the left hand side of the pitch easily beat Melters goal keeper looping in on the far upright post as Kawangware enjoyed the lead in what seemed to be the match winner.

Melter had not used their full energy though as they came back seeking the leveler as straight from restart, Wambora powered in a bullet header from a corner kick to restore parity with minutes 4 minutes to go.

The match ended in a 3 all draw before heroic James Kamau atoned for his earlier blunder saving three post-match penalties to catapult his team to the finals of Westland’s Zone.

Early at the same venue, Lucky Summer were lucky to sail through to the Semi Finals of Eastland’s with a hard fought 5-4 post match penalties  win over Baba Dogo after the match ended in a 1-1 all draw.

The Super eight Tournament has been sponsored by Sports Pesa and organized by Extreme Sports.