Jesse Were recalled as Kimanzi names squad for Uganda friendly 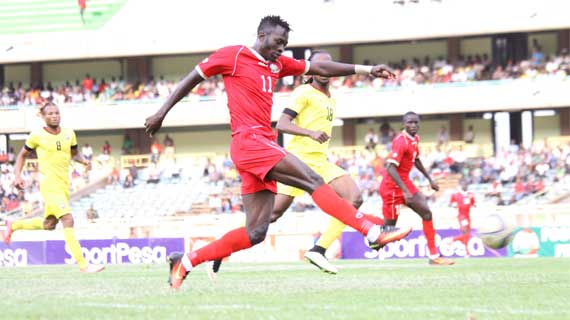 If there is anyone who knows how to get the best out of striker Jesse Were, then it is Francis Kimanzi. Were clinched the Kenyan premier League golden boot at Tusker FC in 2015 with Kimanzi as boss and it is no wonder the highly qualified tactician has handed the Zesco United forward a recall to the national team as he named a squad of 27 to take on Uganda in a friendly match in Nairobi on September 8.

Were was freezed out by Frenchman Sebastien Migne during his stint and only played 45 minutes in a friendly game with the tactician saying his stats having never scored for the national team had put him out.

While the free-scoring ex Tusker and Mathare United man has been brought back from the cold, his two compatriots Teddy Akumu and David Owino have not been named, with Akumu just recovering from injury. Musa Mohammed, a constant name in Migne’s team sheet has also not been included in the squad.

Also missing out is Dennis Odhiambo who has however been placed in the stand-by list. The former Sofapaka man, now at KCB, had also been consistently featuring under Migne, but looks not to be a big favorite for new boss.

Stars are also scheduled to play against Libya in October in either Tunisia or Morocco.