Jepkosgei and Yego wrapped up Safaricom Athletics calendar in style 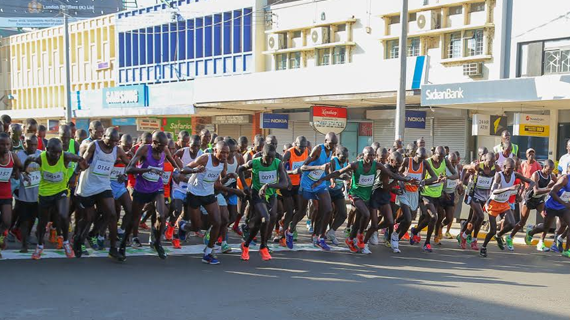 Jepkosgei and Yego wrapped up Safaricom Athletics calendar in style

Boasting of Edinburg victory abroad, she skilfully engaged her experience to beat her rivals clocking 2:42.44 for the crown.

Machakos runner  Shelmik Miriuki impressed with  2:44:47 in second while  Sylvia Tanui from Uasin Gishu who clocked 2:45:06 to seal the podium.

Delighted by her second d victory on the course she said,  “The weather was too hot that slowed my pace, compared to last year , the race was also very competitive as many runners tuned up for the race,” said Jepkoskey.

Little known Elkana Yego  from Transnzoia  won the men’s category after coming from behind in a hotly contested race.

The athlete who took part at the Ottawa marathon timed 2:17.30 to get his maiden win on the road.

The second position in the men category was won by Abraham Too from Nandi who timed 2:25:41 followed by Jackson Gumo from Uasin Gishu who clocked2:28:30

According to Yego he was not sure of the victory in the first 10km which was highly paced.

Though he was behind, he slowly manoeuvred his way to the front in the remaining 7 kilometres.

“When we were only two remaining I started planning how to overcome him.Eventually I got my energy and powered my way to the victory,”He said.

The Wheelchair Category was won by this year’s Standard Chartered Marathon, Sylvester Baraza who made his first stab in the 42-km race in Kisumu and clocked 2:25:15.

“This was my first time in Kisumu Marathon, I won the Standard Chartered Marathon and came here to try my luck, I am happy that I won,” said Baraza.

The tricycle second category was won by Nicholas Mungai who clocked 2:36:34, as Pascal Otieno clocked 2:41:50 for the third category.

Fourth overall was George Seda from Kisumu who timed 2:42:23 as David Oloo also from Kisumu clocked 2:52:52 to return fifth overall.

Ladies tricycle category was won by Jane Kerubo also of Nairobi who clocked 3:08:04