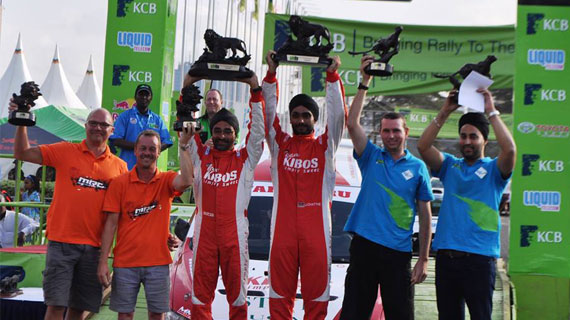 Champions at the KICC Finishing in Nairobi

And Chatthe who is the reigning African and Kenyan champion did it in sheer bravado in the dusty and demanding volcanic ash soil terrain.

His calm and assured march to final service at Elementaita Lodge in Naivasha belied the excitement that was bubbling underneath- and at exactly 4pm, it spilled over in a solid stream of joy at the Kenyatta International Conference Centre (KICC) finish ramp.

Jassi as he is fondly referred to by fans found himself propelled to the summit of Safari when some other KNRC speedsters among them Finish driver Tapio Laukanen, Baldev Chager and Carl Tundo suffered mechanical gremlins in the second leg on Saturday.

Rajbir Rai who dominated the better part of Day Two took second place despite a 2:10minutes penalty he incurred for a late check in late at TC7.

Albeit winning two of the three stages on day 3, Flying Finn Tapio Laukkanen sealed the podium dash incidentally 8.39minutes behind the winner.

Navigated by Pasi Torma in a Subaru GVB 13 Tapio was left to rue the three punctures he picked up on both loops of Day 2 which was the longest and toughest of the Kenya Motor Sport Club organised rally.

Chatthe's navigator Gugu Panesar had this to say after guiding Chatthe to two straight Safari wins.

"We are very happy to have won the Safari for the second time running. Jassi drove extremely well this weekend. We had a good pace all through, the rhythm was really good. We also took it very cleanly on the technical sections  just to ensure we do not clip any rocks," said Chatthe's navigator Panesar.

Ian Duncan came in fourth followed by Tundo who is expected to unveil his new rally monster (a Ford) in due course.

"We had two punctures, no breaks , no diff, so the car had its own issues. We borrowed it from Onkar because our new car wasn't here yet. The new car comes next week so hopefully it will be ready for the next Rally," said Tundo.

Out of 42 drivers who entered the event, only 21 survived the demanding conditions.

Osman Abdullahi only on his second KNRC outing took 13th overall which was a repeat of his début on Kisumu Rally last month.

Alex Lairang'i won the 2WD class while Ramesh Vishram was the sole finisher in the classic car category.

Newly elected KMSF and veteran rally driver Phineas Kimathi who attended the ceremonial finish alongside Sports PS Richard Ekai said his priory will be to make Safari an international event.

The event was co-sponsored by Liquid Telecom, Toyota Kenya and Jacaranda Hotels.

Mombasa Motor Club will stage the fourth round of the KCB KNRC in Rukinga, Voi next on23rd of July.