Its Gold and Silver for Kenya in girl’s steeplechase 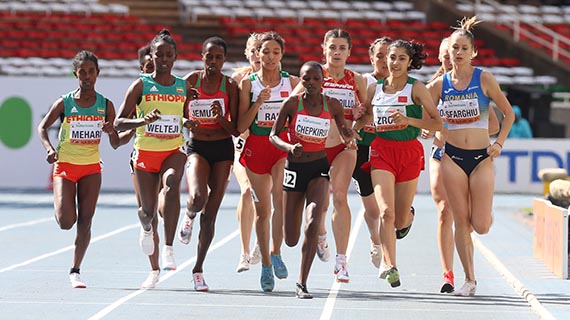 Its Gold and Silver for Kenya in girl’s steeplechase

Mercy Chepkurui and Caren Chebet celebrate after winning 1-2 positions during the 2000m finals at Kasarani on Friday night/Michezo Afrika Photo by E.Onchiri

Mercy Chepkurui and Caren Chebet were in  a class of their own with a dominant pace that saw them bag gold and silver respectively in the girl’s 2000m steeplechase race in the ongoing IAAF Under 18 competition at Kasarani.

It was back to back gold for Kenya during the Friday afternoon timetable as Manangoi had already electrified the crowd with a gold in the 1500m boys just before the girls took to the track in the “Kenyan specialty” race.

With the usual threat coming from the Ethiopians, the Kenyan girls set off fast and controlled the race through out.

The fastest of the Kenyan Chepkurui stumbled in the final water jump, managed to collect herself and  overtook Chebet but the latter had enough reserve in her tank tom outsprint her.

For her efforts, Ethiopia’s Etalemahu Sintayehu bagged the bronze medal.

After the race Caren Chebet told the media:

“I have never competed in another international race .I thank my coach for teaching us discipline.It was God’s plan for me,” said Chebet.

A disappointed Jepkurui said: “I thought I was winning. I am not happy”