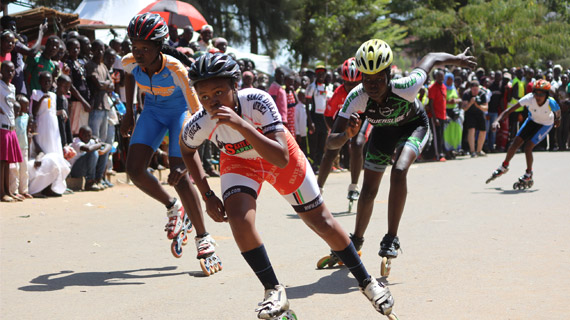 Isaac Mburu is the winner of the 2016 edition of the 42 KM Bungoma Skates marathon. Mburu put up a brave final push to beat a strong field that comprised of members of the Kenya Speed skating team who pushed for the top prize to the last roll.

The Skates marathon that was organized by Michezo Afrika  in partnership with the Magharibi Michezo Awards and Kenya Skating clubs saw Mburu walk home with 30,000 shillings in prize money.

This was the first 42 KM marathon road race in Kenya and a big test for the Kenyan team.

“ I am so excited. My friends pushed me hard but I must admit the 42KM stretch needs a lot of endurance and preparation. We had a good race, the roads were good and we thank Organizers for the amazing experience and hope next year we can make it even bigger and more challenging.” Mburu said after the race in Bungoma.

The Skates Festival was graced by the Kenya Federation of Roller Skating secretary General Lameck Wafula who also announced that the federation is keen to make sure the next edition of the competition attracts international marathoners from across the world.

“We are happy to work with the dedicated organizers of the Bungoma Skates festival as we target to make this as one of our biggest races on the calendar.” Lameck noted.

Lameck further congratulated all winners and clubs that took part in the festival urging more sponsors to come up and support the growth of the sport in Kenya.

“We would like to see more clubs being formed across the country and the more we take this sport to the people at the grassroots the more we keep growing it.