Impressive Kibai focused on defending his titles in Turkey 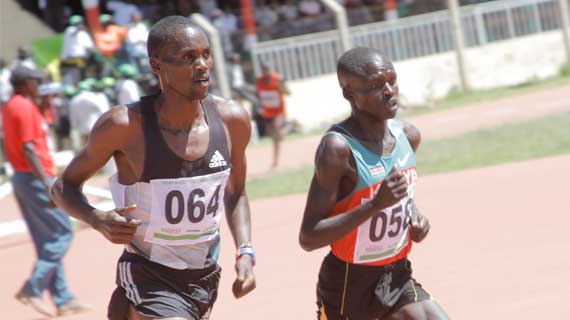 Impressive Kibai focused on defending his titles in Turkey

KIbai in action during the 1000m finals in Eldoret

Triple Deaflympic Champion Simon Kibai hopes to defend his titles when he lines up at the Deaflympic Games in July in Turkey.

Kibai’s sterling performance on the final day of Safaricom National Deaf Athletic Games in Eldoret earned him three places in Team Kenya for the Deaflympic Games.

In 2013 Kibai won three gold medals during the Deaflympic Games in Sofia in Bulgaria.

He will also defend his titles after making a cut in 1500m, 5000m and 10,000m races when the athletes battled for limited slots in Team Kenya for the bonanza.

The 29 year old athlete is confident of a sterling performance in Turkey.

“I have prepared myself for the competition through intensive training. I made the cut in three categories and my focus is to enter into the books of history to successfully defend all the titles,” Kibai said.

He made his international debut at the 2012 Deaf championships in Canada and his star has been shining all-through.

“All the competition I have participated have been good for me and I am impressed that we have promising talents in the disciplines. I will embark on serious training now focused on the global games,” He added.