How important is hydration to sports performance? 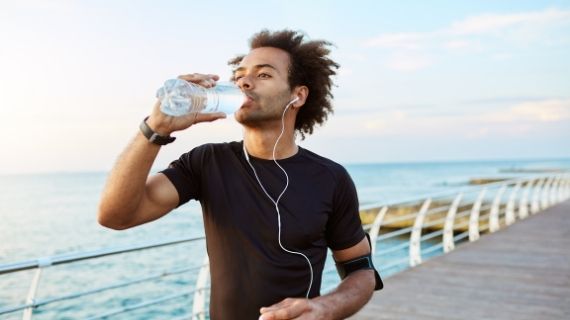 Most of us are aware of the benefits of keeping hydrated. Not only does it increase energy levels and promote optimal brain function, but being hydrated can also help maximise your sporting performance. As we move forward into hotter summer months, it is important to be aware of the effects of dehydration.

Of course, when you exercise you lose fluid – not only through your sweat, but through the air you breathe out. The amount of fluid your body loses is dependant on many factors such as intensity, duration, and climate. Losing ‘too much’ fluid, or being dehydrated, can have many detrimental effects for performance.

When we exercise, we also lose key electrolytes such as sodium and magnesium through sweat and the air we breathe out. Although electrolytes do not contain energy, they are essential for sending electrical impulses to the nerves and muscles, including contracting and relaxing the muscle. Because of this, muscle cramping may be due to the loss of these electrolytes and dehydration.  Electrolytes should be replaced by drink or food post exercise.

WHAT ARE THE DANGERS OF DEHYDRATION?

It is said that a body water deficit of 2% body weight can impair athletic performance. As body sweats aim to cool down the body, fluid loss causes the blood to thicken, therefore decreasing oxygen supply and putting extra pressure on the body. From this, it is evident that performance will be affected if the body is put under more pressure. Furthermore, dehydration can decrease the power output seen in cycling, impair decision making and also skill execution in team sports such as basketball and football.

Many people are dehydrated without even realising it. A simple way of assessing your hydration status is to look at your urine colour. A concentrated, dark coloured urine indicates dehydration whereas a pale, water-like colour is a more optimal, hydrated state. Symptoms of dehydration include sluggishness, fatigue, or headache all of which are not ideal for performance.

Some athletes do not drink enough fluids for many reasons such as limited opportunity to drink, poor drinking strategies or a poor understanding of fluid requirements needed during exercise. It’s important not to rely on thirst as an indication to drink fluids - often this can be too late as dehydration kicks in.

IS IT POSSIBLE TO DRINK TOO MUCH?

Of course, over consuming fluids can also lead to stomach cramps, ‘sloshing’ in the stomach and having the urge to urinate frequently. Over consuming fluids can also lead to a condition called hyponatraemia. Hyponatraemia occurs when plasma sodium concentration falls below 135mmol/litre and can also be fatal. This can be caused by both over consumption of water and/or sodium loss through sweat. Symptoms of hyponatraemia include confusion, fatigue or headache, which can also be the symptoms of dehydration which can lead to confusion of both.

HOW CAN I PROTECT MYSELF FROM DEHYDRATION?

To protect health and optimise sporting performance, it is important to catch dehydration early. My advice would be to carry a water bottle around daily, set a goal of drinking at least 2 litres of water a day.