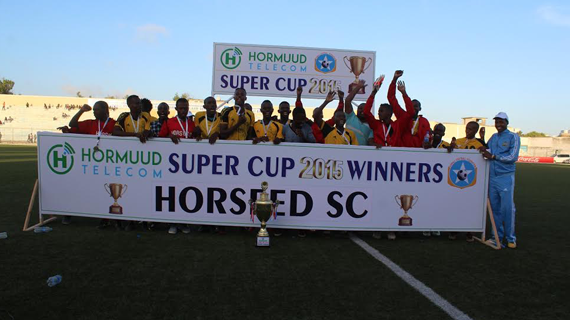 The 9-man military side defeated their rivals of the Somali Police [Heegan] by 3-1 in penalties after the allocated period of the match ended in 0-0.

The duo hardly fought for the Super Cup title, but it was a big misfortune for Heegan who were unable to score against the 9-man team who got two of their players awarded with red cards.

Daniel Matengo [Kenya] was given a red carded in the 47th minute of the match, while his teammate, Mohamed Abdi Soomane was also sent out in the 79th minute, but that didn’t prevent their team from lifting the trophy. Mohamed Ahmed Mohamoud of Heegan was recognized today’s man of the match.

Somali Football Federation president, Abdiqani Said Arab, who talked to the media after the Super Cup match first thanked the two Televisions, Universal TV and the state-owned SNTV for taking the match before international audience.

The president said that the live coverage will continue, although he acknowledged that his federation was unable to put every league match on TV screens.

“The SFF is intending to get live coverage for our football matches in the months to come, but during the early stages, some of the most interesting matches will be broadcasted live with the help from Somali TV channels” SFF president explained.

The president added that the live coverage was encouraging business promotion and as well as will attract the attention of Somali-owned businesses in and outside the country who would like to promote their businesses through football.

“The live coverage is also a huge marketing drive for our football” president Abdiqani Said Arab noted. The president said he was very happy that some Somali trading companies were now showing interest for exhibiting their businesses in the football facilities.

“Another importance for the live coverage was also to allow those who cannot attend the stadium and Somalis living abroad watch football games on TV screens while at their homes and we have realized that dream” SFF president added.

The president noted that hundreds of thousands of Somalis living outside the country for more than 30 years including those who were born abroad have the right to be able to watch football competitions taking place in the country and that was one of the main reasons for the live coverage.

However, Hormuud telecome, the biggest Network provider in Somalia has partially supported the Super Cup match.