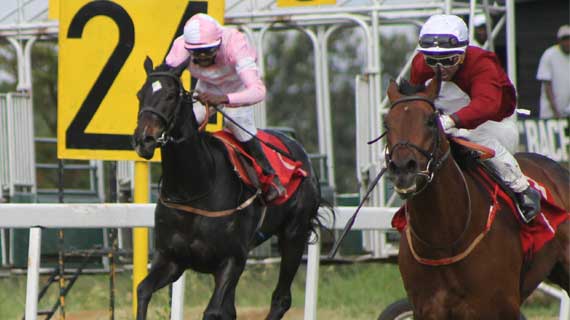 The South African breed colt trained by Pasty Sercombe crossed the line in 56 seconds only needed to take home his maiden top honors.

Compadre beat three other two-year old South African breeds all trained by P. Sercombe. Compadre was receptive and gave in to all of Lesley’s asking to yield the honours. Comic Star steered by Patrick Mungai came in second, one and three quarters lengths.

Kalola rode by Richard Kibet was third, one and a half lengths behind Comic Star. Coming in a distant fourth was Cashing In navigated by Joseph Lokorian finishing three lengths after Kolola.

Henry Muya-jockeyed by Go Pro galloped across the line in 1.43.3 to win the Thimlich Ohinga Site Handicap for three-year olds ran over 1,600m. Go Pro had to overcome stiff competition from Fire Fighter mounted by Kibet to defeat gelding by half a length.

Jockey Peter Kiarie, riding Oliver Mutua-trained Zimbabwean breed Mashushla took the third position, a length after Fire Fighter. Crixus, steered by James Muhindi had to be contented with last spot one and a quarter lengths behind Mashushla.