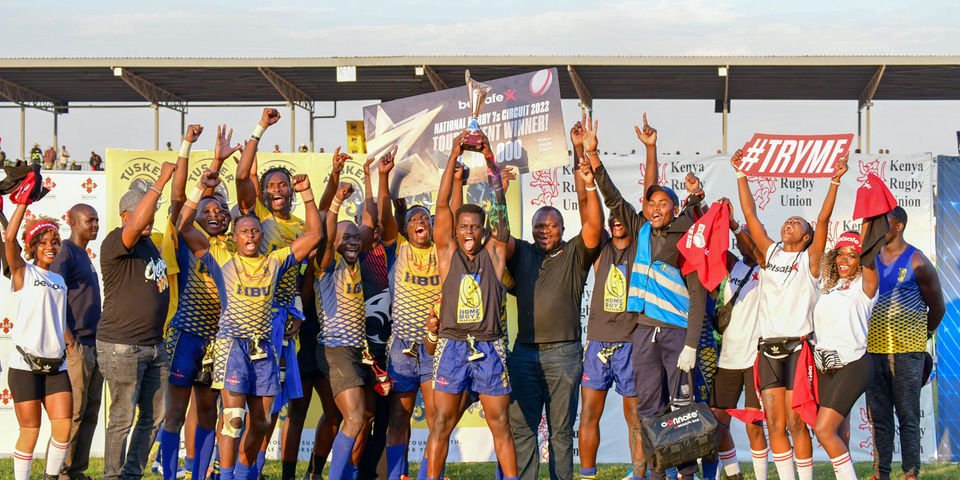 Homeboyz are the fourth different winner on the National Sevens Circuit after defeating Menengai Oilers 19-14 in the final at the Jomo Kenyatta Stadium in Kisumu on Sunday 3 July 2022.

Homeboyz are the fourth different winner on the National Sevens Circuit after defeating Menengai Oilers 19-14 in the final at the Jomo Kenyatta Stadium in Kisumu on Sunday 3 July 2022.

Amon Wamalwa gave the deejays the lead, scoring after a silky run with Mike Nyakundi converting for a 7-0 lead.

Oilers responded through Amos Onyinkwa with Mark Kwemoi converting for a 7-7 score before Leonard Mugaisi scored at the break to give Homeboyz a 12-7 lead at the break.

Collins Shikoli then landed a third try for the deejays before Oilers struck late, Beldad Ogeta’s converted effort a tad too late for Gibson Weru’s charges.

KCB finished third at the Dala 7s, rallying from a 0-7 deficit to defeat Mwamba 10-7.

Crispin Omondi put the black shirts ahead with a converted try that gave them a 7-0 lead heading into the interval before Michael Wanjala replied with an unconverted effort for KCB after the restart. Andrew Amonde would then secure the points for the bankers, overpowering two defenders to score the winning try.

Earlier, Homeboyz and Menengai Oilers set up their final date after navigating through difficult semifinal fixtures.

Homeboyz were 14-10 winners over Mwamba while Menengai Oilers defeated KCB 14-12 in their respective semifinals.

It was Mwamba who took the lead through Ronnie Omondi’s unconverted try before Mike Nyakundi landed on the stroke of halftime, Amon Wamalwa converting to give Homeboyz the 7-5 lead at the break.

The deejays would extend the lead immediately at the restart, Tom Maina beating three defenders to score at the corner, Wamalwa sure with the conversion for a 14-5 lead.

Mike Okello would land an unconverted try for Mwamba to bring the score to 14-10 before nerves got to Mwamba who spilled the ball at fulltime while deep in Homeboyz territory,a lost opportunity as the deejays reached their first cup final this season.

The second semifinal saw KCB and Menengai Oilers face off.

It was the Oilers who went ahead through Mark Kwemoi who scored  and converted his own try for a 7-0 lead before they went down to six players after Timothy Okwemba’s yellow card and were made to pay for it as Bob Muhati scored for KCB to bring the score to 7-5.

It was soon 12-7 for the bankers as Isaac Njoroge touched down on the stroke of half time.

The Oilers, back to their full compliment after the restart went ahead through Dancan Abukuse’s converted try, the only score of what was a tense second half.

Joseph Mumo would call for fulltime as the result ensured there will be fourth different winner on the circuit this season.