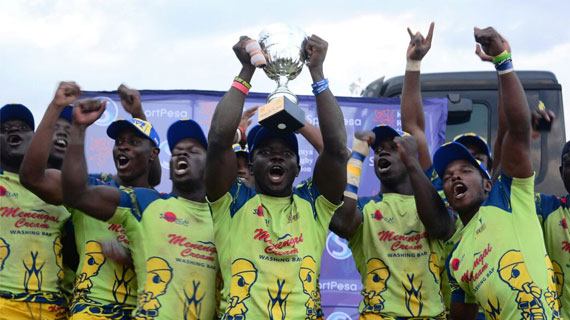 Menengai Cream Homeboyz won the opening round of the National Sevens Series, winning the Top Fry Prinsloo Sevens with a 24-19 win over Resolution Impala Saracens in an entertaining final at the Nakuru Athletic Club on Sunday.

Jeff Oluoch put the deejays ahead, receiving the ball deep in his half and racing clear to score for a 5-0 score before Leonard Mugaisi scored and converted his own try for a 12-0 lead.

George Okowa handed the Sarries a lifeline, scoring under the posts on the stroke of half time, Mohamed Omollo converting for a 12-7 score.

Mugaisi landed his brace after the restart, Michael Wanjala converting for a 19-7 lead before former Kenya Sevens international Leon Adongo scored for a 19-12 score.

Derrick Mayar would break through the deejays defense, scoring under the posts with Omollo’s conversion leveling the scores before Oluoch  landed his brace, killing off the game for the deejays who went top of the National Sevens Series log with  22 points.

Kenya Harlequin had earlier claimed third place with a 14-7 win over Strathmore Leos with KCB lifting the plate courtesy of a 22-7 win over Mwamba.

Mean Machine had earlier won the division two tournament on Saturday, earning promotion to the top tier at next weekend’s George Mwangi Kabeberi Sevens in Nairobi.

It was an error strewn, tense first half, the two sides heading into the breather scoreless but Homeboyz managed to find a rhythm, Michael Wanjala eventually crossing the chalk against his former side with another Leos old boy Humphrey Owuor converting for a 7-0 score. Owuor would convert Humphrey Mulama’s late try to seal the win for the Leos.

PLATE SEMIS
KCB set up a final date with Mwamba in the plate final, seeing off hosts Top Fry Nakuru 17-10 in the plate semifinal.  Donald Aluoch had put Nakuru ahead with an unconverted effort but Collins Wanjala’s try and Vincent Onyala’s converted effort saw the bankers take a 12-5 lead into the breather.

Geoff Ominde handed Nakuru a lifeline with a second half try before Wanjala secured result for the bankers.

Mwamba left it late to sneak into the plate final with a  22-19 win over Kabras Sugar. Brad Owako and Dennis Mokaya gave Kulabu a 10-0 lead before Kabras clawed back with tries from Derrick Obiero and Aluda Beda’s converted effort to lead 12-10 at the break.

Brian Tanga scored and converted his own try to see Kabras go 19-10 up but Mwamba never gave, Horace Otieno scoring under the posts , Martin Wanjia converting for a 19-17 score before Joe Otieno struck at the death to see Mwamba through to the final.