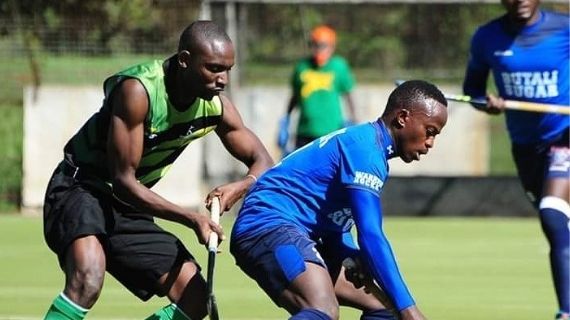 Parklands Sports Club's Maxwell Njolo (L) and USIU-A's Victor Chidi (R) jostle for the ball during a past match.

It was a battle of equals as both teams had a 50% ball possession, high rate of accurate passes and ran the field each creating chances which were combated with tight defense.

The two squads played 46 minutes with none hitting the opponents'boards as goals in the 1-1 draw game were notched in in the eighth and 54th minutes. After a formatted build  up advancing towards Multimedia's danger zone, Richard put the guest lineup, Wazalendo Masters ahead 0-1 in the first quarter.

Still trailing by a goal in the fourth quarter, the varsity outfit piled pressure on their opponents and their efforts bore fruits when Frank Alusa came through with a spectacular shot past Wazalendo Masters' custodian in the 54th minute.

In the Women's Super League, the University of Nairobi and debutants Orange Leonas failed to crack each other's back-line and settled to a barren draw at the same venue.

Bernard Kubasu cancelled Kisorio's goal in the 38th and the determined Daystar made their went all out to collect maxim points with two goals in the 49th and 56th minutes from Ambrose Ochieng and Ismael Ibrahim respectively.