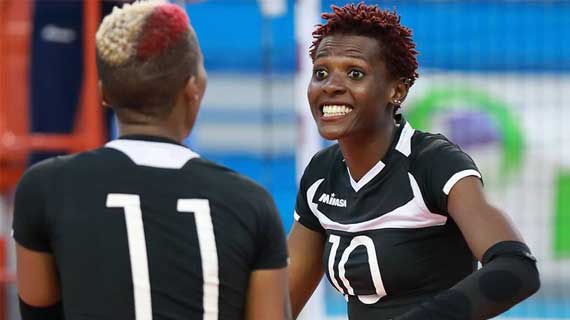 Kenya Pipeline's hopes of reclaiming the African crown were boosted on Saturday as they booked their second win at the competition  following their convincing 3-0 (26-24, 25-23, 25-16) Pool C win over Sonatrach of Algeria in Monastir Tunisia.

The first set was closely contested between the two sides and the same drama continues to the second set but the Kenyans got it right in their favour. Pipeline came into the third set with more urgency and purpose. Sensing the imminent threat of being unable to recover, Sonatrach's coach called for a time-out to dispel advice to the team.

However nothing could stop the Kenyan champions from cruising to their second victory.

"I thank my team mates for this important win. Everybody was hungry for this victory and we are glad to have won the opening two matches without dropping a set. Our focus remains on the ultimate prize." Said team captain Trizah Atuka while speaking to michezoafrika.com after the match .

In another match played at the same venue on Saturday , ARSU from Seychelles suffered second defeat in the 2017 Women’s African Club championship after been beating 3-0( 25-8, 25-19, 25-13) by Shams of Egypt.