Heroic reception for the historic Morans 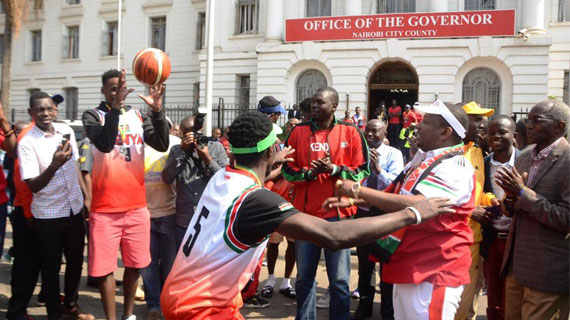 National basketball team -The Kenya Morans- jetted back home on Monday morning to a triumphant welcome after finishing second at the inaugural FIBA Afrocan Championship in Bamako, Mali. The Morans lost 82-61 to DR Congo in the final but won the admiration of many after their splendid performance.

They were welcomed back home at the airport by officials from the Kenya Basketball Federation as well as those from the Nairobi County Government. After arrival, the team went through a road show from the airport around different city roads, displaying their medals and trophies to excited city residents.

They were later hosted at City Hall by Governor Mike Sonko who rewarded them with Sh1mn and promised the construction of more basketball courts in the city to help tap and nurture from basketball talent.

“I'll continue to do my best in supporting sports especially with construction of sports facilities across Nairobi in order to boost development of sports by nurturing talents of our youths,” Sonko said.

The Morans who were playing their first continental tournament in 26 years stunned all and sundry by reaching the final with Tyler Okari and Tom Wamukota being named in the All Star team. Okari finished as the top scorer while Wamukota, son to Webuye West MP and former Kenyan volleyball star Dan Wanyama was the best blocker.