Heartbreak as Harambee Stars lose to Algeria in AFCON opener 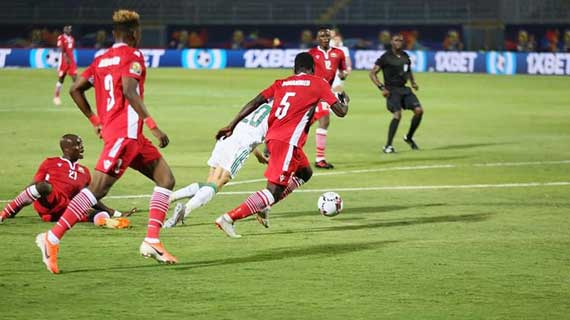 Kenya's Harambee Stars got off to a disappointing start at the 2019 Africa Cup of Nations after falling 2-0 to Desert Foxes of Algeria on Sunday night.

Algeria looked strong in all departments with a sublime performance in the first half , Baghdad Bounedjah converting from the spot  and captain Riyadh Mehraz's deflected goal sealing the group C win for Algeria.

Coming to this match, the books favored the Algerians and they took advantage  with a quick offensive start. Just three minutes into the match , a quick long well calculated ball dipped behind the defense line but Matasi was quick to tip it out for a non-resultant corner.

It was in the 7th minute that Aboud Omar attempted a long shot at goal for one of the only three Kenyan  attempted shots, his effort too feeble to trouble the Algerian shot stopper.

Just three minutes later, Aboud almost turned villain as he committed a silly back pass with his resultant follow up tripping the striker from behind leading to a dangerous free kick on the quarter hour.Captain Mehraz blasted it just inches past Matasi's right upright.

Algeria landed a penalty in the 32nd minute when Dennis Odhiambo tripped a tricky Oucef Atal who dribbled himself into the box from the right flank. Baghdad Bounedjah confidently sent Matasi to the wrong side for the opening goal for Algeria.

Bounedjah  almost made it a brace  but he missed a crucial ball from close range  in the 40th minute failing to properly land in a  lovely cross with the entire defense line beaten in the air.

Algerians doubled their lead in the 43rd minute when Riyad  Mahrez's goal bound left footed curve was deflected into the goal by Aboud Omar , completely displacing  a hapless Matasi.

With a two goal cushion , The Algerians pushed the Kenyans in their own half  with sleek touches  and selfish possession at the start of the second half while cutting out any meaningful delivery of balls to the flanks for Kenya's Michael Olunga and Ayub Timbe.

The introduction of Johanna Omollo in the Kenyan midfield after 60 minutes brought composure at the Kenyan center  but all attempted attacks for the Stars were cut out by a solid Algerian defense.

Statistically , Algeria had a 59% possession over Kenya's 41, Kenya having committed 28 fouls against Algerians 12.

In the end , it was a heart breaking start for the Kenyan fans who will now await for another opportunity, another day, another chance of hope.

Kenya will next face Tanzania  on 27th at the same venue  hoping for a convincing win against their neighbors.

Tanzania had earlier lost to Senegal 2-0.