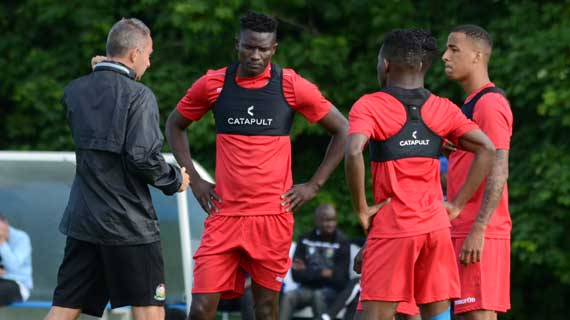 Olunga joins team mates at the training camp in France

The Harambee Stars training camp in France is now complete after the arrival of striker Michael Olunga. The forward jetted into Paris on Thursday morning and took part in his first training session with the rest of the team later in the evening.

“I am happy to have arrived and settled in with the team. The hard work now starts as we look forward to the African Cup of Nations. I am feeling very fit and ready and now I have to go in and fight for my place. No one is assured of being in the team,” Olunga said.

The forward’s late arrival was due to a tussle between his Japanese club Kashiwa Reysol and the Football kenya Federation, but at the end an amicable solution was reached to have the striker released in time for the camp.

Olunga however is not expected to be part of the team for Friday night’s friendly match against Madagascar in Paris as head coach Migne looks to preserve him until full fitness.

The tactician will now work with the group of 27 players before dropping four ahead of departure to Egypt on June 18.