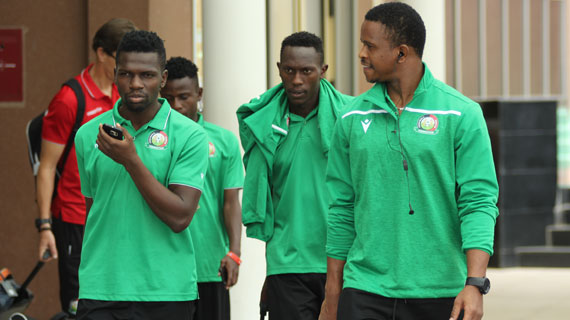 Football Kenya Federation has slashed gate charges for the Sunday evening tie to a flat rate of Sh100 to attract more fans to the stadium.

National football team Harambee Stars jetted back from Dar es Salaam, Tanzania where they played out to a 0-0 draw with the hosts in the first leg of the 2020 African Nations Championship (CHAN) first round qualifier.

Stars earned themselves a slim advantage with the result ahead of the return tie to be played on Sunday at the Moi Sports Centre Kasarani. Head coach Sebastien Migne has admitted as much and now says the team must plot for a decent outing when they face the Taifa Stars at home.

“It was a good result away from home. One week ago we didn’t know how it would be easy to achieve a result because we lost so many players during the transfer window. Collectively, we were strong defensively and now we need to improve offensively,” the tactician stated as the team returned on Monday afternoon.

The same sentiments were echoes by skipper Dennis Odhiambo who stated;

“It was a tough game for us but we managed it very well especially in the first half when they came out full force. We didn’t concede a goal and that was the first good thing. We had some mistakes as a team but we will look to rectify that this week and get ready for the game. We need to do a lot offensively so that we qualify to the next round,” Odhiambo stated.

Meanwhile, Migne has called in Tusker FC forward Boniface Muchiri and Kakamega Homeboyz’s Kevin Omondi as he looks to improve the attacking line. Stars will need to win the game to progress. A barren draw will force the game to penalties while a scoring draw will see Tanzania progress on the away goal rule.

At the same time, the Football Kenya Federation has slashed gate charges for the Sunday evening tie to a flat rate of Sh100 to attract more fans to the stadium.