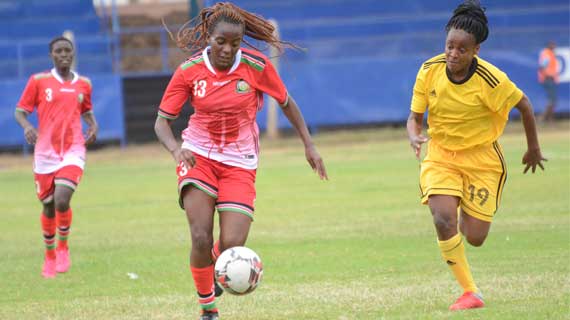 National women’s football team Harambee Starlets beat Ethiopia 3-2 on Saturday evening in their warm up match ahead of the 2020 Olympic Qualifiers which kick off next week. Gentrix Shikangwa stepped off the bench to score an added time penalty as Starlets saw off the Ethiopians.

The Kenyan girls were using the match to prepare for their qualifier against Malawi as they are scheduled to play the first leg away from home on August 24 and the return tie in Nairobi four days later. Ethiopia meanwhile are preparing to face Cameroon.

It was a balanced tie with both sides having equal scoring chances, though Kenya bossed much of the opening half.  Mwanahalima Adam had scored a goal in either half in between Busser Medina’s goal, to give Kenya a 2-1 lead before Ethiopia equalized with six minutes to go through Kidane Serkadis.

Kenya got into the lead early, Adam slotting the ball beyond the keeper after eight minutes when she picked up a ball from Corazon Adhiambo before breaking into the box. The home girls had taken control of the game from early on, dictating the tempo by keeping possession.

Starlets who had a very new team after most of the senior figures were kicked out were keen to make an impression and they tried to build from the back, though most of the time a dysfunctional midfield let them down.

They thought they had doubled their advantage in the 13th minute when Topista Situma tapped into an empty net after the Ethiopian keeper had spilled an Elizabeth Wambui cross, but the flag was up for offside.

Ethiopia had their first chance of the game in the 18th minute and it was an open one. Medina Busser was picked out with a brilliant through ball by Senayt Boyzo, but she shot wide with only the keeper to beat.

Ethiopia got into level terms just six minutes after the restart, Medina curling a beauty from the edge of the area after a quick start from a freekick found the Kenyan backline napping.

Kenya worked to get back into level terms with Mercy Airo’s freekick from range going against the crossbar before Asefa Alemanesh almost turned the ball into her own net as she tried to defend a Mwanahalima cross.

Shikangwa then almost scored with her first touch of the ball after coming on as a sub with a freekick that went just wide. However, Kenya regained the lead in the 63rd minute with a fine finish from Adam who struck first time after being send through by Corazone.

Ethiopia drew level when Serkadis tapped into an empty net after the Kenyan keeper spilled a cross from the right. But Kenya scored the winner from the spot after Adam was fouled inside the box.