Handsome rewards for rugby players after their Singapore triumph 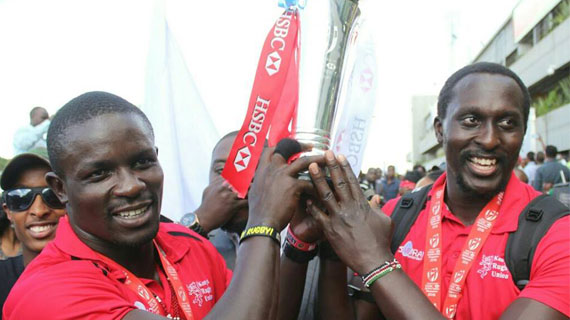 Handsome rewards for rugby players after their Singapore triumph

The triumphant Kenya national sevens side landed back home on Tuesday afternoon to a heroic welcome  from their Singapore outing where they won the HSBC Rugby Sevens Main Cup for the first time in history.

Kenya beat World leading side Fiji 30-7 to become only the second african nation to have won the prestigious main cup after South Africa.

The team  was received by government officials led by minister Hassan Wario, sponsors Kenya Airways led by CEO Mbuvi Ngunze and Marketing Director Chris Diaz, current and former Kenya rugby Union officials and  hundreds of fans clad in national team jerseys including the Watembezi veterans who laid the ground  for Kenya's  long journey to the top of the world.

After landing, the team was driven in top of the range limousines to  the nearby Ole Sereni for a celebratory welcome luncheon hosted by sponsors Kenya Airways.

During the luncheon minister Wario confirmed that the sports ministry will reward the team with two Million Shillings  while Kenya Airways pledged 100,000 shillings per player and three tickets for each player to KQ destinations of their choice anywhere in the world.Wario further said more cash rewards will be announced on Wednesday when the team meets president Uhuru Kenyatta at State house.

Kenya Airways further hinted at a possible increase in the sponsorship package in the coming days as they reaffirmed their commitment towards support the growth of Kenya Rugby.

At the same time Nairobi senator Mike Sonko also pledged to reward each player with 100,000 shillings.

In their remarks,officials thanked all those who have walked the 17 year long journey with the Kenyan team including the Watembezi squad of 1986.

Captain Andrew Amonde while speaking on behalf of the players said , " This is an amazing day for all of us and  the players deserve all accolades because they are heroes. This win is for all of us as Kenyans and we thank you for your support and prayers. We thank God for making this day the way it looks today."

The team is expected to  visit state house for a meeting with president Uhuru Kenyatta on Wednesday afternoon.