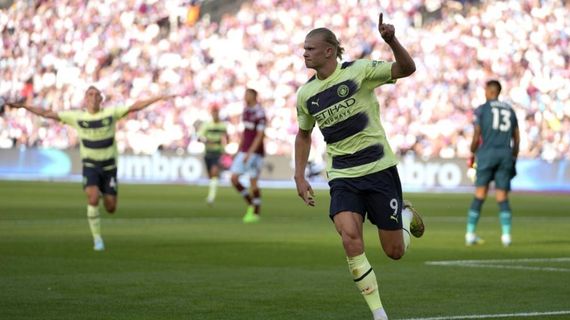 Haaland needed 35 minutes to open his City account from the penalty spot after being brought down by the goalkeeper in the area, and then netted with a clinical low finish in the 65th minute to double the lead.

Erling Haaland scored twice on his Premier League debut as Manchester City opened its title defense with a 2-0 win over West Ham on Sunday, showing just why Pep Guardiola spent big to bring in the striker this offseason.

Haaland needed 35 minutes to open his City account from the penalty spot after being brought down by the goalkeeper in the area, and then netted with a clinical low finish in the 65th minute to double the lead.

After Liverpool was held to a draw by Fulham on Saturday, City sent an early warning that it remains the team to beat in England.

City led the league in scoring last season with 99 goals as it edged Liverpool to the title by one point, despite often playing without a recognized striker up front. Having the towering Haaland in the middle only makes Guardiola’s attack look even scarier.

After City struggled to break down West Ham’s defense in the opening 30 minutes, Haaland showed his speed to accelerate away from two defenders as he ran onto a pass into the box from Ilkay Gundogan and was brought down by substitute goalkeeper Alphonse Areola as they vied for the ball.

He calmly dispatched the penalty by sidefooting into the left corner and then sat down cross-legged in a meditative pose — his trademark goal celebration that could become a frequent sight in the Premier League.

Areola, who had to come on in the 29th after Lukasz Fabianski picked up a knock, couldn’t do much to prevent the second goal, either.

Haaland timed his run perfectly to meet a through ball from Kevin de Bruyne and then used his left foot to slot the ball inside the far corner.

“It was a good start,” Haaland said, adding that he will get even more chances as he becomes more used to playing with his new teammates. “It’s about the connections we do every day in training and about practicing this. So we get better at this, and this will come even more, so I’m not worried.”

Haaland scored 86 goals in 89 games during his three seasons at Borussia Dortmund to establish himself as one of the most-wanted players in Europe before opting to move to City, where his father Alfie played between 2000-03.

Alfie Haaland celebrated in the stands as his son became just the second City player to score twice on his Premier League debut, after Sergio Aguero did so in 2011.

“Good that he saw both goals,” Haaland said. “It’s a big moment for me, debuting in this competition.”

He was taken off in the 78th to a standing ovation, having missed out on a hat trick when his header sailed high.

Judging by this performance, though, it won’t be long before the next goal comes along for Haaland.

“Now it’s almost 30 minutes since I scored the last goal,” Haaland said in his post-game interview, “so we have to keep going.”