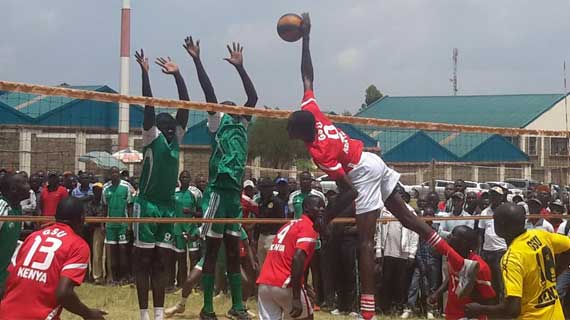 GSU snatched the title from the mouth of the host, KDF with a 3-1 (25-18,24-26,27-25 and 25-23) sets in the men's finals which was officiated by top Kenyan referee, John Odundo, holder of the FIVB Grade B license which is the second highest certificate in world of volleyball refereeing.

Prisons had found themselves trailing in the opening set when the bankers cashed in the opening set with a 25-22 set score but the wardresses displayed great courage to come back to the game. They leveled things up in the subsequent set before taking the lead in the third set with identical 25-17 set scores in both sets.
KCB however leveled things up in the fourth set to send the match into a decisive set.

Former Prisons' attacker Dorcas Jepleting who crossed over to KenCom House this season played a key role for the Bankers but she could not help her side tame her juniors at Prisons who are out to permanently cement their positions into the senior team.

Coach Vernon Khainga could not help but watch his side run out of gas at the most crucial moment of the game which saw them lose 15-6 in the final set to hand Prisons their first of the seven titles up for grabs this season. Prisons was guided to the title by assistant coach Josp Baraza.

GSU on the other hand, had to bring their A game in a tensed men's finals after surviving an ambush laid by the Army side in the second. The Ruaraka side cancelled KDF's 26-24 leveler but ran out of ammunition in the middle of the battle when the paramilitary side held their ground to neutralize KDF attack in the third set to open a set advantage.

In the run up to the final, KCB knocked off Tetu High School with an easy 3-0 (2512,25-18,25-7) win in the semi final while Prisons locked the students of Mount Kenya University in the other semis.

Both sides had a good outing in Nyeri which saw them bag victories in the opening leg of league matches staged at the same venue last Friday.