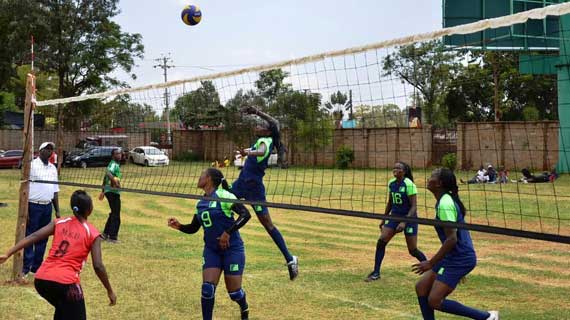 Both matches ended in straight sets in favour of the victors with former champions GSU,  who lost the title to Kenya Prisons last year, overpowering Mombasa  Prisons in a one sided match.

All the above teams have something to prove this year. GSU lost the national throne to arch rivals Prisons. The consiquence of that poor performance in Mombasa last November would see them pull out of this year's Africa Club Championship set for mid this month in Tunisia. Winning the league this year is top of the priority list of the paramilitary side as the new season serves off.

Only Kenya Prisons will represent the country at the annual continental games.

The army men who finished sixth last year on the other hand, missed their first national playoff in over 10 years and they would want to bounce back to the elite group of four after the regular season.

KDF survived Rangers' scare in the second set which saw the Nyeri soldiers trail the loggers for the better part of the game before they caught up with them 24 ups after Rangers took a two point lead early in the match. But poor reception and weak attacks from Rangers who returned to the league this year having pulled out early into the season last year, cost them the three points when they surrendered the lead, only to loss the set 25-27.

KDF enjoyed home ground support from the passionate fans who turned up to catch a glipse if too volleyball and they rewarded their fans with a sweet victory, wrapping the match with a 25-20 set scores.

Coop Bank last took part in the playoff in 2014 but head coach Geoffrey Omondi is optimistic he will make a return to the top four this year.

"It is a good start towards the playoff," said Omondi who bagged six points from Nyeri's outing to temporarily put his side top of the log.

The former national team head coach acquired four new players this season including Nobestus Maiyo and Cleaphus Kirwa who crossed from Nairobi Water, Emmanuel Melly (Rangers) and Moses Omondi from Nairobi Prisons; registered his second victory with a 3-0 (25-21,25-13, 25-16) triumph against Mount Kenya University. The match was however temporarily stopped following light showers. According to FIVB rules, no volleyball match should takes place when it is raining.