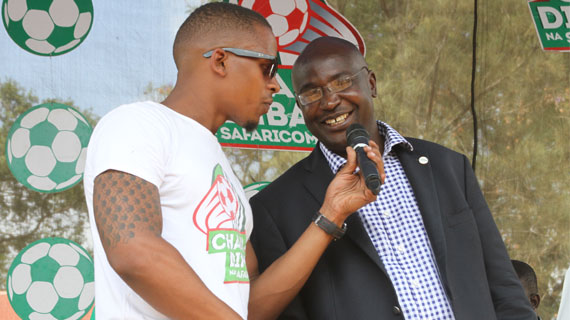 Bungoma County Government has today announced plans to upgrade Kanduyi stadium to an international standard facility by the year 2020.

Making the announcement on Sunday afternoon during the finals of the Magharibi Chapa Dimba finals staged at the same Kanduyi stadium, Bungoma County Governor H.E Hon Wycliffe Wangamati has said his team will commit between 100-200 Million shillings in the coming financial year towards upgrading Kanduyi ,Kimilili and other subcounty stadia.

The governor noted that his county is known to produce some of the finest sports talents in East Africa across all sports saying his government will work towards creating opportunities that will harness more talents in all sub counties.

“Bungoma is known as the home of sports talents in Kenya and we are proud of all our sportsmen and women who have brought a lot of pride to this nation. My presence here underscores my commitment towards supporting sports and talent development across the county and we have already set out plans to upgrade Kanduyi and other sub county facilities.”

The Governor added that, “We have plans to set aside between 100-200 Million shillings towards upgrading this Kanduyi stadium to a world class facility and the best in the region by the year 2020. We shall also upgrade other sub county stadia including the one in Kimilili as we believe this will create more opportunities for our youth.”

"Ours is a desire to change and transform Bungoma into a leading County and this can only happen with our commitment towards zero tolerance to corruption. I have said it before and I will repeat again today that my government will not entertain any form of corruption. We are committed to work towards bettering the lives of our people and we hope every member of this county will support us to achieve our goal.” He added.

Chapa Dimba tournament Director Chris Amimo who is also the Vice President of the national soccer federation –FKF- lauded the Governor for showing commitment towards upgrading Kanduyi stadium and also for being the first Governor in Kenya to attend the regional finals.

During the regional Chapa Dimba finals, Mukumu boys and ArchBishop Njenga Girls qualified to represent Western region during the National finals set to be held at the Bukhungu stadium in Kakamega at the end of March.

Bungoma County was represented by Kapsokwony Boys and Chelebei girls who were eliminated at the semi finals on Saturday.

Winners at the national finals will win one million shillings and a chance to travel to London for a mentorship program that will include meeting Chapa Dimba Ambassador Victor Wanyama who plays for Tottenham Hotspur in the English Premier League.