Gor Sink AS Ports to book a quarterfinal berth 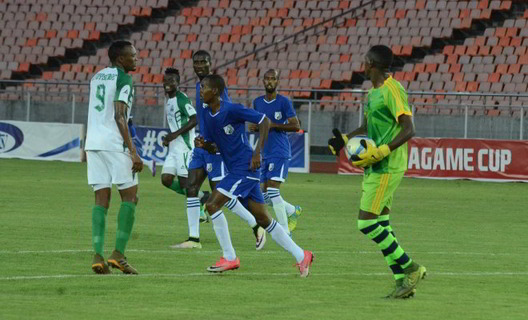 Gor Mahia draw level on points with Rayon Sports but take the second spot to secure a berth among the last eight in the ongoing CECAFA Kagame Cup in Dar. Next they face AZAM from TAnzania

Gor won their first match in the ongoing CECAFA Kagame Cup to go through to the quarterfinals of the tournament.

The Kenyan giants beat Djibouti based AS Ports 2-0 in their last fixture in Group B that was played on Thursday at the National Stadium, Dar.

Two well-taken goals from Philemon Otieno and Charles Momanyi in the first spell ensured that Kerr and his boys had a smile after two tough draws earlier in their CECAFA campaign. The two goals remained decisive as K'ogalo secured a spot in the last eight.

Before the match, hopes of Gor Mahia seemed to have been dimmed by their first two draws of the tournament by Rwanda's Rayon Sport whom they were meeting for the second time this year and Lydia Ludic Academic from Burundi. They have now finished second in the group and will now face Azam FC from Tanzania in the quarterfinals on Sunday.

The match began with Gor under pressure to progress to the last eight. Coach Dylan Kerr had to grapple with a number of options including taking a gamble on Bernard Ondiek, Momanyi and Philemon in place of veteran midfielder Francis Kahata, George Odhiambo and Joash Onyango.

However, even without the green army that they are used to back home, Gor picked up the pace, enjoying considerable possession early in the game. this pace and possession proved fruitful as the first goal finally came in the 13th minute through Philemon. The ball came from Innocent Wafula who beautifully cut back the ball to put the former Ushuru midfielder clear, who responded in kind and made no mistakes to tap the ball home.

A set piece doubled the lead at the stroke of halftime. Geoffrey Walusimbi floated in a corner kick that found Momanyi freely waiting to nod the ball home. Gor continued to dominate the match throughout the game even though they failed to add more goals. Boniface Oluch ensured a clean sheet after he denied Nadou Fofana in the dying minutes of the game.