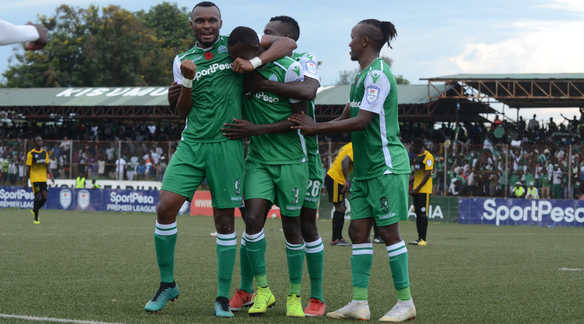 Its a one horse Kenyan Premier League title race

Kenyan Premier League leaders Gor Mahia beat second placed SOfapaka 2-0 in Kisumu on Sunday to move closer to a record 18th league crown and this now means they are just five points away from defending their title.

The victory against Sofapaka moved them 10 points clear of Sofapaka and if they beat Nzoia Sugar on Wednesday in Mumias, then Sofapaka will essentially be out of the equation. However, Bandari who are third have two games at hand and are 14 points adrift.

Realistically, it would be impossible for them to catch up with Gor but mathematically, it means they still stand a chance. Bandari play Chemelil Sugar on Tuesday and Tusker FC on Thursday to get to the 30-game mark.

If they lose both games, and Gor would have won against Nzoia, then the 17-time champions will be expecting a guard of honor from AFC Leopards when they play in the Mashemeji Derby on Sunday.

Against Sofapaka on Sunday, Gor came in knowing they had to pick points against their closest rivals to wade off the last gasp challenge. Had they won, Sofapaka would have bridged the gap to four points and handed themselves a realistic chance of fighting for the title.

But, they were undone by two second half goals from Jack Tuyisenge and Samuel Onyango, both breaching a thinly lined out Sofapaka offside trap. Sofapaka had their chances including Piston Mutamba’s header with quarter of an hour left that went wide while John Avire saw his point blank shot saved late on.