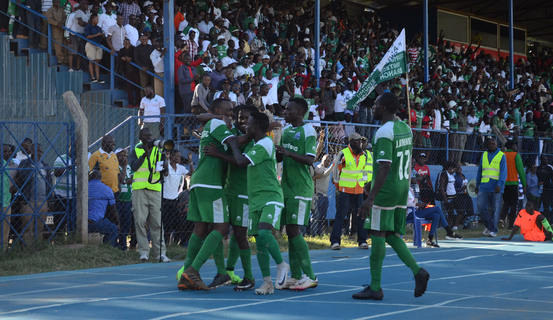 Gor Mahia scored two goals, one on the wrong end, but still managed to hold on and achieve the historic feat that sees them become the first Kenyan club in the group stages of continental football since CAF revamped their club games.

Francis Kahata immediately wiped the blushes off his skipper Harun Shakava who planted the ball in his own net, but Thabo Mnyamane gave SuperSport some hope with a 68th minute goal.

However, a mix of good goalkeeping and a touch of fortune saw Gor hold on for the slim loss and book the historic berth. It was a soothing result for Gor who only arrived in Pretoria 17 hours to the match and didn’t even have time to feel the venue a day to the match as is tradition.

Visa hitched and lack of air tickets almost broke off the trip and hand SuperSport a sweat-less path to the group stages, but some last minute luck came their way and they responded with the result.

The first half was end to end, SuperSport trying to get the goal and Gor trying to score one that would make their hosts work an uphill task.

In the 28th minute, Boniface Oluoch was called into action making a routine save off a Mnyamane freekick. Prior to that, Sipho Mbule had tried his luck from distance, the rifle flying just over.

Gor’s best chance of the half came through Bernard Ondiek who was released inside the box but his shot went just wide.

In the second half, Dylan Stoffels had two chances for the hosts, but none could land inside the net. Stoffels first forced Oluoch into a good save from a shot from close range, while in the second instant,, he couldn’t control Jamie Webber’s cross with only Oluoch at his mercy.

The pressure finally bore fruit in the 59th minute when Shakava cleared a cross into his own net. However, no sooner had the celebrations from the stands died down than Gor went back into the game. From a quickly started play, George Odhiambo swept a cross into the box and Kahata pounced beating Reyeed Pieterse.

Knowing they now had a mountain to climb, SuperSport increased the pressure and got relief when Mnyamane’s shot found its way into the net.

Gor had Oluoch to thank making two brilliant saves to deny Darren Smith who was presented with two chances back to back.

Gor almost snatched a second goal on the other end, but Pieterse denied them.

The win guarantees Gor Mahia at least Ksh 27 million which will go a long way in alleviating the club’s financial woes.

Gor Mahia will now await the draw for the group stage to be held on Saturday 21st April in Cairo Egypt to know their next three opponents.Gor Mahia is seeded in Pot 3 alongside Al Masry, Aduana Stars and Djoliba.

In the group stage, the teams will play each other on a home-and-away round-robin basis. The winners and runners-up of each group advance to the quarter-finals of the knockout stage.